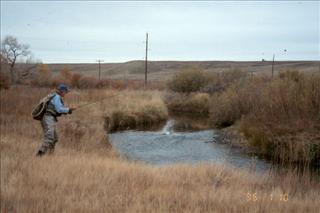 Description: The Little Laramie River offers over 6 miles of classic meadow fishing in southern Wyoming. It is noted as an excellent brown and rainbow trout fishery with open to moderately willowed stretches that include ample bend pools and undercut banks. An average size for fish is 11 to 13 inches but every year several fish in the 18- to22-inch class are hooked and landed.

Location: Located 15 miles west of Laramie, WY, the property is less than a 90-minute drive from the Front Range communities of Loveland and Fort Collins and only 2.5 hours from Denver.

Capacity: Up to 8 anglers are allowed.

Four of us fished the Little Laramie. Flow of about 65 cfs is about twice the average for this time of year, but still tough to fish. The day was partly cloudy in the 50's, with rain moving in during the afternoon. There was wind, but it wasn't that bad. Water temps in the mid to upper 40's. Fish were hunkered down in brush, moss, and undercuts. We saw no fish actively feeding at any time during the day. They were, however, in ambush mode. Between the four of us, we caught around 30 fish on the day. Everything on streamers. Boogers, sculpins, and muddler minnows of most any color seemed to work. Stealth and long casts were required to catch fish. Most fish were browns and ran from 10 to 16 inches. Largest brown was 18" accompanied by a 22" and 24" rainbow. ~ Vic Walker -- October 14th, 2013

Low flow (70 cfs) and high winds (gusts to 40 mph) made the fishing challenging at best. Started at upstream boundary with streamers but quickly changed after becoming tired of cleaning moss off of them every cast. Switched to dry/dropper and landed a few brown trout on purple prince nymph. Drove down to ranch house after lunch and fished the short stretch of the Little Laramie for a couple hours... wind had calmed slightly and far more fish were evident. Caught several more browns up to 17", all on the dropper, with purple prince being the fly of the day. ~ BH -- May 8th, 2013

Very windy day w/ gusts up to 40 mph put a damper on an otherwise beautiful spring day. Was only able to stand about 3 hrs of fishing due to the wind but caught some nice fish. Parked at the upper end and fished mostly streamers... majority of hits were on lighter colors, copper seemed to work best. Tried a nymph rig w/ a hare's ear and a pheasant tail but had no action. Highlights were a 20" rainbow and an 18" brown, both on the copper colored streamer. ~ BH -- May 1st, 2013

Two of us decided to give this property a try this weekend. We arrived on the water at 9:00 a.m. to sunny skies. It stayed sunny all day despite clouds to our east and west. We saw bugs of all kinds. PMDs early, caddis, brown drakes, green drakes, and yellow sallies later with a few red quills. The drakes are huge, size 12 to size 8. The fish were mostly looking up. We had the most success on a size 14 yellow stimulator although fish were caught on humpys, caddis, and hoppers. We did have some luck on the dropper as well. Mostly on a large bh pheasant tail with a couple on a caddis pupa. One fish was caught on a wooly bugger. We caught about a dozen fish each with many more lost. Most in the 14 to 16 inch range. Largest was a 19" rainbow. All but two of the fish caught were browns. The fish were in the riffle or shade. It got a little difficult from about 1:00 to 3:00 p.m., but once the sun started going down the fishing picked up. Be warned if you go, bring DEET and consider a head net. The mosquitos got so bad in the evening we were inhaling them. The bugs were bad, Alaska bad. ~ Vic Walker -- June 18th, 2012

Very good day. Water is in perfect shape, clear, good flow, perfect temp. There are mosquitoes however. There were caddis hatches all day long and a PMD hatch that lasted 2 hours starting in the late morning. Caught about 25 fish ranging from 10 to 18 inches. Most were 10 to 14 inches but at least 4 at 18 inches. Caught fish on Caddis, s12 PMDs and a few on streamers. Fished up Brown's Creek to the confluence and from there up the Little Laramie to the top. ~ Jeff C -- June 7th, 2012

Partly cloudy w/ frequent rain and wind throughout the day... temps reached the upper 50s, streamflow about 160 cfs. Started at the upper parking and walked down far enough to fish back up for nearly 4 hours. Caught about a dozen browns between 10-16 inches... all on woolly buggers (Black/blue). Drove down to the lower parking and fished up for 3 more hours catching another 8 browns of the same size on the same woolly buggers. Highlight of the afternoon was a 20" rainbow JP caught on the WB in some skinny water. Tries dry/dropper rigs (hare's ear) throughout the day but only hooked 1 small brown on the dropper. ~ BH -- May 4th, 2012

Sunny, 50 upon arrival at 9:30 am (only two hours from home), warmed to lower 60s by end of day (4ish departure). 15 browns to net, about 17 or 18 hooked. Only two rainbows, but both whoppers: 23 and 24 inches respectively. One of which I had lost in September after a long fight....but this time I landed him, and on a 4 weight to boot. He's pretty young, so he is there waiting for you. Flies were very simple, and worked all day. Very few risers, so I used a yellow sally or para adams up top, essentially for a strike indicator (water was low enough) with a hare's ear below it. The hare's ear worked all day long, so I never changed it, just varied the depth of the dropper and sometimes added weight for spots where it was required. Never had to tied on a strike indicator or resort to a streamer....not bad for April at 7000+ feet. Two hunting eagles contributed to a wonderful start to my RMAC season! ~ Steve Fitzgerald -- April 23rd, 2012

A solid day. Arrived about 9:45 am, sunny, mid 50's. Warmed to 60s during the day, with mostly sunny conditions. Best fishing was from arrival until 1 pm, but still caught fish 2-6:30. Windy, 20-30 mph all day, but bearable. Not a ton of bug activity on surface until late, when yellowish mayflies came off. Caught 20-25 fish, although a decent number were small. Some,however, were not: 24 and 22 inchers, both rainbows. Most of the others were browns. Jumpers too. Best flies were subsurface, the dropper (phpt and copper johns, red worked well late in the day), although some, including the 24", hit the hoppers on top. The fish are where they are supposed to be: Rainbows in deep pools at the end of runs, and browns along the banks. ~ Steve Fitzgerald -- September 20th, 2011

Note: This report is from an RMAC member. Fishing on the Little Laramie August 20th was great! The river is at a perfect level and still cold and clear. We began fishing at 8:30AM and immediately started catching fish on the surface. A #16 Elk Hair Caddis was our most productive fly. We caught a bunch, but none were bigger than 14 inches although, all were fat and hard fighters. At midday the feeding tapered off so we moved to the lower end of Brown's Creek. Fishing was slow all afternoon except for one large rainbow my fishing partner caught with a beaded prince nymph in one of the deep holes. I tried the deep hole next to the ranch gate. I had seen a large rainbow there a week earlier, but was unable to catch him. After two or three casts I caught him on a black woolly bugger. He was around three pounds. Later in the afternoon we moved back to the west end of the property. After waiting out a brief thunderstorm, we started fishing again around 5:00PM and for about an hour the feeding was fast and furious. Again, we caught a bunch, browns and rainbows, some up to 15 inches. Our best flies were #16 Adams and anything with a Caddis profile. ~ Jimmy -- August 28th, 2011

When I arrived on the Little Laramie around mid-morning on the 11th of August, fish were feeding everywhere. I tied on an Elk Hair Caddis, and fishing the section of stream from the corrals to the ranch driveway, I quickly caught a dozen browns ranging eight to fourteen inches in size. Around noon the feeding slowed so I tried a prince nymph in a deep hole near the gate and was quickly rewarded with a very nice brown of about two or three pounds. As I was landing the brown a huge rainbow came out of nowhere and tried to get in the act! After lunch I switched to a Grasshopper and fished the property further east of the ranch house. The Grasshopper was even more popular than the Caddis. Most everywhere I cast produced strikes, but it was most effective when plopped down next to overhanging grass. Once I let the grasshopper trail behind as I moved upstream and large fish came up and snapped it off! As the afternoon progressed though, a strong wind came up and made it almost impossible cast and seemed to stop the feeding. I fished a little on Brown's creek but had no success due to the wind. Both creeks are at a beautiful level and still fairly cold. There were many of insects, Caddis and Mayflies, but I would start with a Grasshopper if I were fishing there today. Note: This report was taken from an RMAC member. ~ Ron Kafer -- August 18th, 2011