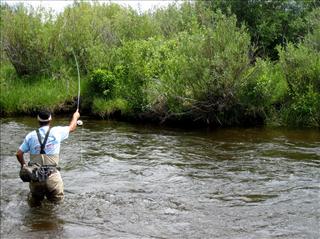 Description: The Moose River Ranch contains two miles of the 15-30 foot wide Michigan River, plus a secluded pond full of nice Rainbows. Browns make up the majority of the fish population on this lease, but some fine rainbows can also be caught. Most fish run 10-14 inches, but a skilled angler has a good chance of catching some 20 inches and longer.

Location: This property is located about 8 miles north of Gould in North Park.

Capacity: Limited to 2 anglers per day.

I fished the Michigan River on July 11th. The stream is at an ideal level - very clear and easy to wade. There was a good amount of insect activity. Caddis, Grasshoppers, and May flies were all present. Although I fished just the afternoon, I caught twenty fish ranging in size from eight to sixteen inches. I had some success using small nymphs in the deeper holes but, almost all of the fish were taken on the surface using an Peacock Caddis, Adams, and Grasshoppers. ~ Ron K -- July 15th, 2013

The front that came through over night brought temps in North Park down into the mid 30's. Even though the water was low, we were able to fish into afternoon. We arrived on the river at 9 a.m. with the water temp at 58 degrees. There was no action on top and few bugs to be seen. We started with hopper dropper and fished for over an hour with no luck. After switching and allowing the water to warm a bit the fishing heated up. Most of the action for the day was on top. My guest caught everything on a s16 Yellow Humpy. I on a s12 H & L Variant with a Pink San Juan Worm dropper. The turned out to be typical Michigan River fishing. There were periods of time where the fish would move into the tails of riffles and feed agressively. Then for no reason they would shut off. This happened several times during the day. In all we caught at least a dozen fish each missing or losing many others. Most of the fish were browns in the 10 to 15 inch range, however we also netted a couple of rainbows each. We tied for largest fish of the day, both being a 20" rainbow. It was a great day of fishing. The temperature in North Park topped out about 71 degrees and the water temp rose to 65 degrees at 3 p.m. It all made for pretty good timing as we had reached the property boundary and we were ready to call it quits for the day. ~ Vic Walker -- August 6th, 2012

Clear day, 70's, water at 35 cfs. Caught about 15-16, missed a few more. Most of the best fish were in the first 100 years from the parking space, and frankly I was surprised that it wasn't more active. Best fishing was from 10:30-1p, but fish were around the whole day. Most took a dropper, either a red copper john, prince nymph, or later in the day a rabbit's ear seemed to work. Very lovely property, good water and other than the endless turns driving up/down Cameron Pass, a great trip. ~ Steve Fitzgerald -- October 2nd, 2011

Caught C68 on just about the perfect day... partly cloudy w/ a little rain, flow right around 50cfs. Fished with my 13 yr. old son and his 11 yr. old buddy. We all caught some nice fish including a fat 19 inch rainbow on our first cast. Hopper and dropper rigs were effective w/ most of the fish taking a bead head nymph of some sort... copper john, prince, hare's ear, and pheasant tail were all productive. The exciting part was that several large fish made aggressive strikes on the surface fly... landed two 20+ inch rainbows that attacked the Charlie Boy Hopper (tan). A great day that produced approx. 2 dozen browns and rainbows. ~ BH -- September 7th, 2011

Note: This report came from an RMAC member. The Michigan was high and a little murky on August 22nd. It looked much like I would expect it to look in mid June! When I began fishing at 9:00AM, there wasn't any insect activity that I could see so I tried several nymphs at various levels, all with no success. I finally tried a black Woolly Bugger and on my first cast caught a nice brown of about two pounds. I threw the Bugger back in the same hole and immediately caught another brown. This one was at least three pounds or better. These fish must be eating well this season as both of the browns had big stomachs and were very strong! I fished the Bugger until midday catching several more fish, browns and rainbows, 12 to 15 inches in size. I didn't resume fishing until about 5:00PM. I tried the Bugger again, but had no strikes whatsoever. There was some surface activity so I tried a #16 Elk Hair Caddis and caught around a dozen. All were small except for one rainbow of about 15 inches. ~ Jimmy (RMAC staff) -- August 28th, 2011

Water was perfect. Caught lots of little guys on dry-dropper rig -- all on the dropper though a few took swipes at the dry -- between 11 a.m. and 2 p.m. Not a lot of bugs but did see a few yellow sallies and had a few chase a yellow stimulator. Returned at dusk. Lots of bugs out including a few drakes, but very little surface feeding. Caught a couple slightly larger bows on streamers. Checked out pond, but saw no fish at all. Stayed at Bear Den cabin -- very cozy with deck that has great views. (If you go to North Park, consider the N. Platte lease, as water is perfect right now. I fished public water and caught my biggest fish of the year -- 20" rainbow.) ~ Kathy -- August 23rd, 2011

The further down stream the better the fishing was my therory yesterday and it is holding true. The upper end has been too low and I am sure the temps have forced the fish to cooler habitat. Had a nice day from early morning to just after noon. Had to quit when the moose hunters showed up. Had no idea that moose/bear season opened this weekend..... Good luck to Bullwinkle!!! Again, I'll be back next year if there is more water. ~ MG52 -- September 13th, 2010

I fished the first three beaver ponds exclusively, hopper and a dropper on the way upstream and streamers on the way downstream.I caught about 15 browns one was all of 4" long, and he ate a foam hopper almost as big as he was. BTW, he was the only strike I got on the hopper. fished a tandem rig with a PT and a olive leech low and slow, and all the strikes were on the leech. browns are starting to chase each other around, will be spawning soon. ~ Mick -- September 7th, 2010

Arrived at river at 9:30 a.m. Bright blue bird day. While I was at the car setting up, a car pulled up and informed me they had been fishing this property the previous two days. They informed me that they hadn't done very well except in the deep hole by the bridge on streamers. I admit that my expectations took a pretty big hit at that point. I fished the first hole by the bridge for about 30 minutes. I only had one hit on a trico spinner. The fish was decent sized but I never got him hooked. I decided to switch to a small sized 12 foam hopper w/ a bhpt dropper and work up stream. In a faster hole just above the deep hole I hooked a large brown on the hopper. Three other fish came after that hopper. One of the three looked to be equal size as the one I hooked, the other two smaller. The larger fish that missed then came back around and somehow hit and got hooked by the pheasant tail. I had both fish hooked for about 15 seconds before the dropper broke off. I did land the brown on the hopper. It measured 19 inches. I'm lucky that both didn't come off. I continued working my way upstream and catching a few fish on the hopper until I lost it in an overhang in a deep pool. I then switched to a s12 yellow humpy. I was getting more hits on the humpy, but not many hookups. I did however have a couple surprises instore toward the upper end of the property. First I hooked a decent fish on the humpy. When I landed the fish I was surprised to find that I had a very pretty 14" cutthroat in the net. Shortly after catching the cutthroat, I was startled by a very loud crash just behind me in the willows. Only about 15 feet away appeared a very large female moose. She was equally as startled and we both slowly backed off from each other. That is as close as I ever want to be from a moose. After that I worked my way to the end of the property. By then it was about 2:30. The wind had picked up so I worked the river back to the car w/ streamers. No luck on the return trip so I headed home about 4:00 p.m. On the day I caught 11 fish, all on top. One brown at 19 inches, one rainbow at 17 inches, one rainbow and one brown at 16 inches, the cutthroat at 14", and the rest of the fish were smaller and of both varities. Pretty good day if you ask me. The bugs weren't too bad either. ~ Vic Walker -- August 16th, 2010

Weather was cold and snowy w/ occasional wind gusts. Fishing was surprisingly good with lots of activity in the deeper pools. We landed over 20 trout between 10 - 19 inches... both browns and rainbows. The rainbows in this stream put on an excellent fight. ~ Brad Helms -- October 26th, 2009