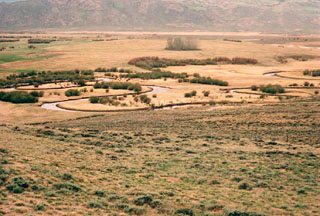 Description: The Wattenburg Ranch has 1½ miles of the North Fork of the North Platte, which is one of the best mid-sized waters leased by RMAC. There are many browns and rainbows averaging 10 to 16 inches, with a few larger ones approaching five pounds.

Location: This property is located in northern Colorado, approximately 8 miles west of Walden.

Capacity: Limited to 3 anglers. A higher number is permitted if in one group.

Amazingly huge fish. largest was a 26" rainbow that i was a able to sight fish to - amazing. Fished 8-3pm and then 5-8 pm. The fields were still being irrigated, with water returning to the channel in the bottom half of the property. the upper half was quite shallow and when fishing it later in the day was not nearly as productive as the bottom half of the property which had irrigation returning back into the channel. A number of large fish were holding right in the irrigation return flows into the main channel. Fished black buggers most of the day hard against the banks or in the middle of the channel where flows focused together. Truly amazing fishing with >30 fish and more than 12 fish in the 19-24" range. Not much happening on dries - except early in the morning where I few fish took caddis or a trico trailer. Lots of mosquitos - so be ready. Be sure to hike all the way down to the bottom of the property and work up - it is great water down there with big bends. ~ Paul W -- July 23rd, 2016

Fished C-61 in the afternoon. The wind was blowing 30+ mph gusts, so made fishing difficult. Started off on lower lease and landed 4 browns right away from 8" to 15". Fishing went slow after that and we were blown off the river. Saw several large fish, but they were real spooky. Left and came back at about 6pm and fished until dark. No more luck. There were rises in the evening. Caught all fish on nymphs, green copper john and red zebra midge. 3 of us fished the water when we could and didn't do very well. ~ Dave C. -- October 17th, 2011

Water is still high and a bit more off color than normal. The banks are still a mess due to the water being over the banks for months. 3 of us fished hard all day with streamers mostly. Tried a Hopper/dropper rig also with no strikes on either. Saw 1 big fish rise but few bugs coming off. We only netted 4 fish, 2 were nice sized Rainbows/Donaldson Steelheads and 2 were smaller Browns. The water above the bridge is still in good shape as there is lots of holding water. Remember to bring your bug spray as there is still standing water in the fields. ~ Stu Stout -- August 22nd, 2011

Very beautiful property, fished the lower section,very hot and very windy water is still very high hard to get around because the water has just went back in its banks, very muddy and the mosquitoes love it. Fished streamers and hoppers did not see any fish or catch any fish, but I will be back. Apparently the upper stretch is better. The owner is very nice. ~ Chef -- August 19th, 2011

Bluebird day, started at 11 am, water much lower than in August. I had such a good day here on August 1 that I had to go back. Despite the water being lower, still had good results using essentially the same tactics. Above the bridge, the only difference was going further upstream to where the deeper pools now are. They fish are podded up, but once I found them, over 15 hit the green copper john from about 10 am - 1 pm. Over 1/2 were 20" or larger, and the biggest was a 'bow of about 25" that jumped like mad. Great fun. See my Aug 1 report for more details. Went down to fish the lower river because while it was low and a struggle to get to (through the grasses), it just looks SOOOOOOO good. And, to my surprise, it fished really well too! Caught 10 or so more, and surprisingly (give the size of the eagles flying around) the best fish were sitting in pretty shallow water, right in the stream. I used a para adams and a hopped, and took browns from the banks, and 'bows from the riffles....including three over 20". One seemed to jump out of the much on top of my fly (rather than coming up underneath), scared the heck out of me. I LOVE this property. ~ Steve Fitzgerald -- September 9th, 2010

This stretch of the N. Fork is much slower than I expected. After reading previous reports we decided to start above the bridge. It was a cloudless, bright, blue bird day. Add that to a full moon and almost no bankside cover, it looked grimm. To be honest, I'm shocked we caught fish. This property is VERY difficult to navigate. VERY thick grass and willows. The river is also VERY muddy. There is no easy way around, so be prepared. Combine all of this together and the fish were really really spooky. Now the good news; we caught some fish. We tried just about everything and found that throwing a wooly booger right up against or on the undercut bank and letting it slowly swing against the bank would produce fish. It had to be inside of 6 inches of the bank or nothing. I only hooked and landed 2 fish on the day. The first one happened to be 18" and the second was 20". I'm still shocked that it wasn't a skunk day. My partner did a little better but with smaller fish. He landed 8 fish, one being 18", the rest in the 6" to 12" range. All our fish were rainbows. ~ Vic Walker -- August 25th, 2010

Listen very carefully: Fish upstream of the bridge, and put a green copper john about 3-4 feet below a yellow sally, Adams, or even a royal wulf......and hang on. In about 4-5 hours of fishing this stretch, well over 24 (the "double dozen" rule was invoked: After 24, consider it an epic day and stop counting!) fish to net, and most of them REQUIRED a net. In fact, in one stretch I had 10 in a row over 18", with half over 20". And man do they like to jump. 90% on the dropper, but if you get that dry near the bank, be ready for the strike on the dry. Mind you, I'm not exaggerating. See my report from A-10 from earlier this year when I got skunked -- this was the karma payback day. By all observation, a red ant should work too....but I never bothered given how good it was with the other rig. The last two hours were in a steady rain, and it did not impact the fishing in the slightest. Tried the lower part, which looks like a postcard but was very quiet. Given the size of the eagles we saw (one, which I think might have been a golden, was 4 feet tall standing if it was an inch), I think I get why the fish were under the banks in this mellow stretch. Those eagles could lift a coyote. Best part of the day was the last cast. I had missed a big bow all day, and it was taunting me. So I went around the bend, and crept back on the bank, behind the grass, and on my belly. I drifted the copper john over his head from upstream and.....gulp. After a good fight and 4 big jumps, the biggest fish of the day was landed, a solid 27" hen. With that, it was time to dry off, go home, and consider it a memorable day. Fantastic property, friendly ranchers, big, jumpy fish. Not bad. Only negative is swarms (and I mean swarms) of mosquitoes. Frankly, I was glad when it started raining....that was more pleasant. I'm going back in September for more! ~ Steve Fitzgerald -- August 5th, 2010

My 3 friends from OR and I fished this property hard all day. Two went upstream from the bridge up to the property line and beyond with good success. They fished both Hopper/dropper and streamers. The dropper seemed to get more hookups and fish to hand. Golden Stones, Princes & PTails both BH and non BH seemed to work the best, size #10 & #12. No fish rising all day but big juicy Hoppers got a few to the surface. No hogs landed but had a couple on briefly. Mid day was slow. The mosquitoes were VERY thick on the lower section. We tried various bug juices and none seemed to be very effective. All in all a good day of fishing. ~ Stu Stout -- August 1st, 2010

It was a fine day in North Park with temperatures in the 80's and light wind, and we had a fine group of experienced flyfishermen. The flow on the N. Fork was quite low and the fishing was somewhat slow. The fish were holding in the deeper runs. Approximately 3-5 fish were seen rising and these all hit either a hopper or a black beetle. However, best results were obtained drifting (without stripping) a black wooly bugger past fish holding in the deeper runs. Only 8-9 fish (an equal mix of browns and bows) were brought to the net by the group, but one was a 22" rainbow and several were in the 18-20" range. The most productive area was from the bridge upstream to the northern boundary of the property ~ Steve Richheimer -- September 6th, 2009

fishing was good, caught 3 nice browns on the lower end of the property. fished from noon until 4. The mosquitos were as bad as any I have seen, even in the jungle! wore a mosquito net on my head and I highly recommend it if you are gonna' fish this lease any time soon. ~ Mick -- July 17th, 2009