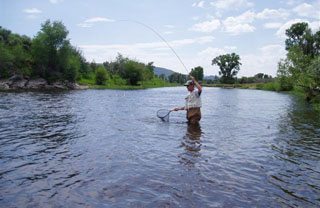 Description: 1 1/2 miles of this 90-foot-wide river. Big water with numerous runs and holes located within a huge cottonwood forest. Big rainbows, white fish and a few pike (some may exceed 40 inches).

Location: This property is located in the Yampa Valley, approximately 4 miles west of Steamboat Springs.

My son, Caleb and 9 year old grandson Landon arrived at 7:30 am in Steamboat to cool 10 degrees F. Had breakfast, stopped by the always helpful STEAMBOAT FLYFISHER, drove to Hogue Ranch and were rigged up and at the river by 9:00. We hiked to the bridge end of the property and began in the deepest slowest pools we could find. Shelf-ice lining the banks and plenty of floating slush made the going a little tough for the first 90 minutes or so but then we started picking up 16-20" bows and browns on egg/midge rigs. Landon stayed upright in spite of the slippery conditions and an occasional floating ice barge, and he landed a few nice Trout that Caleb had hooked. He was casting his own rod too and had a couple strikes that didn't produce a fish. We started moving up toward the historic ranch house about noon and were spread out in a long slow run in front of the cliff wall, when Landon announced, "hey I got one"! He was using a 9'/5wt Sage SLT and that tip was wildly thrashing from 12:00 to 6:00 while the fish made several east-west runs with his dad loudly exhorting him to "keep the tip up", "let him run" and "don't touch that reel!" After about 5 minutes Landon coaxed the 23" Brown into Caleb's waiting net to euphoric shouting and high fives all around! First solo Trout on a Fly Rod and it was indeed a trophy! We caught a number of big and colorful Bows and Browns this day but the one that will be talked about for years will be Landon's Brown! I so appreciate the opportunity to fish these magnificent RMAC properties and especially to be able to take my family to uncrowded and beautiful waters to learn the art of fly fishing and to occasionally be rewarded with trophy size fish. Happy Thanksgiving and tight lines! Jim Barclay ~ Jim Barclay -- November 22nd, 2017

Drove up from Denver and hit the water around 9am. We fished the middle and lower section for the first half of the day. Way more runs and deep pools on bottom half of the property. Put 1 rainbow 18in in the net on a size 20 black foam back rs2. Had some lunch in town then came back and hit the middle to top sections of the property. Another nice 16in rainbow on a big black Sex Dungeon followed by 16 in rainbow on a red san juan worm. Had 2 other nice fish on but popped off before I could get them in the net. Great property, I will definitely be back! ~ Andy Norwood -- October 22nd, 2017

Didn't get on the river until 6:30PM and fished until dark. Caught two very nice trout (12-15"). I had a couple of huge trout on my line, but I didn't land them. One leader broke on one and the other got off just as I was about to net it. The trout were very active on drake flies. I didn't get any bites on caddis. There was a good deal of algae in the water, so I was having to clean my line about every third cast. It had been a hot day, so I fished wherever there was shadows. There are some very large trout in this stretch of the Yampa. ~ Paul Goodrum -- July 24th, 2017

Rough day at the Hogue Ranch. I went to buy a few flies at Steamboat Fly Fishers in the morning and they said things were rough. They were right. It was a really hot day and there was basically no bug activity that I could see. Fishing with a nymph meant checking for moss after every cast. I struck out, but I only gave it three hours in the morning. Things may have improved that evening. I think my timing was bad for this trip. ~ B Fayman -- August 3rd, 2016

This was a difficult day of fishing. The water level was low, about 150 cfs at Steamboat. It was hot and sunny, with absolutely no hatches on the river. I fished from 8am to 6pm and landed only four fish, but three were nice-sized: a rainbow and two browns, the largest about 18 inches. I fished a hopper with soft-hackle pheasant tail dropper most of the day. I only saw one rise, near the bank, and I cast to that spot with my hopper to catch a 16-inch brown. ~ John -- July 25th, 2016

Fun fishing with fish up to 19" mostly on nymph rigs in the morning (8-2pm). Fished the upper half of the property from 5-9pm which was hot on dries (caddis, PMD emerges #12). The water was a little warm, and flows were down which meant no fishing in the braided channels which had been good other times I visited the property. Overall - perhaps 16-18 fish landed. The good holes had lots of action - but not much in-between with most fish holding near top of the holes in the riffles. A few boaters came through fishing - so it looks like the river gets some pressure in this reach. Most fun for sure was dry fly fishing near dark with caddis. ~ Paul W -- July 23rd, 2016

My first time on this beautiful steetch of the Yampa. Fished from the downstream border back up to the middle of the property (7 hrs or so). Many smaller fish, with 1 rainbow and 1 brown over 20" landed. No consistent fly: pat's rubber leg in tan and small beadhead Barr's emerger worked best with some on medium sculpin streamer pattern. ~ Mike Narkewicz -- July 17th, 2016

Tough day on the Hogue. Snowshoed in from the parking area about 10am. River low and clear. Three guys landed 10 fish 15-22 inches, all bows except one brown. Plenty of midges but only caught fish on pats rubber legs, pink worm. Streamers were a bust. Saw no redds, no ice shelves but difficulty getting around with deep bank snow. Snow was slush on 50 degree, blue sky day snowshoe out at 6pm. ~ Dentalboy -- March 14th, 2016

Beautiful day --60cfs. No hatches except a very small grey mayfly. No fish in AM. Fish turned on about 2 PM and had excellent fishing for about 2 hours using small yellow egg pattern and olive RS-2. Many small bows , mid sized browns and several large bows . Several chases on streamer but no hookups. Browns are already spawning--please watch out for, and avoid the beds. ~ Dave M -- October 11th, 2012

Water is low but still a good enough flow. Caught about 10 quality fish. One brown was 24 inches and at least 5 pounds. Also caught several rainbows in the 18- to 19-inch range. Best fly was the Flash Back Beadhead Pheasant Tail s16. One rainbow was caught on a hopper on a hopper/dropper combination and one smaller one on a red San Juan Worm. ~ JD -- September 25th, 2012