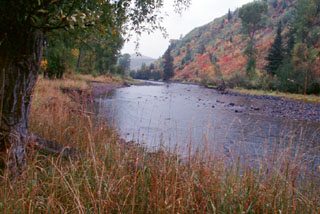 Location: This property is located 51 miles north of Steamboat Springs, near the Wyoming border.

Was really looking forward to exploring this property. It was a beautiful drive out of Steamboat and a beautiful stream. Lots of moss in the water and the temperature of the water felt pretty warm. Got there at about 10:30am and hit the water. Caught three fish at the first deep hole near the lower end of the property. Later hooked a really nice fish, at least 16", but had the hook thrown as he headed upstream through some structure. From there, things slowed considerably. Some bug activity, but not much. Saw a few small fish rising throughout the day and spooked an enormous rainbow when I went back to the car to take a break. Ended up with a few more small fish in the afternoon, but I couldn't help but think the water temp was keeping them a little sluggish for the day. Would love to try it out again another season. ~ B Fayman -- August 3rd, 2016

CFS around 400-450 , which is still a little higher than optimum for this property, but water clear. Only used black stone fly with split shot. Many rainbows 14-18", although still feeding in deeper troughs. Had not moved into the shallower side holes yet. Only fished lower half of property. As a cautionary note--even though the handwritten sign(saying park on the road) is hard to read now, do not park inside metal gate on lower end. I was forewarned several years ago, but had seen other vehicles in there in the past, and decided to park inside the gate for the first time . Unfortunately, the horses took advantage--badly scratched the hood of my car with their teeth. ~ Dave M. -- June 28th, 2016

Overnight thunderstorms in the high country boosted the flow of the Little Snake from about 90 cfs to 100 cfs and caused the water to be somewhat cloudy as it ran through Sheep Mt. Ranch. We started near the downstream parking area and fished the lower section in the morning. I caught a number of white fish and a few bows in the deeper runs using a rig consisting of a beadhead pheasant tail (#14), and a beadhead prince (#14) and a copper john (#16). After lunch we moved to the upper parking lot near the guest house. The fishing was very productive in a deep run below the cattle watering coral. This run produced many whitefish and a number of bows with the largest measuring about 23." In all I netted 19 whitefish and 6 rainbows. Other members of our group were not quite as successful in getting this number of fish but they did not utilized the same set up. Turned out that the hopper-dropper wash not particularly productive but our streamer guy caught only bows, one as large as 20". ~ SLR -- July 26th, 2014

Good day on the a Little Snake, but water still a little high at approx 450 cfs. Water temp 50 degrees at Noon. Took 12-15 bows with most in the 15-17 inch range-one 20 incher. Most caught on Pats Rubber legs, a couple on black streamer. Fishing went dead at 3 pm even though a strong caddis hatch. Only fished lower half of property. ~ D. Miller -- June 18th, 2014

The flow on the little Sanke River running through the Sheep Mt. Ranch was about 100 cfs. The two of us fished from 9 am to 3 pm. The action was nonstop when fishing the riffles and deeper runs along about 1.5 miles of river from the downstream boundary to up near the ranch house. We caught an untold number of white fish, many frisky rainbows in the 12-14" range, and perhaps a dozen large rainbows over 18." The largest rainbow caught was a hog that measured almost 24." All the fish were caught using a rig consisting of a #12-14 beadhead pheasant tail nymph, #14 BH prince nymph, along with a #18-20 copper john. ~ SLR -- June 30th, 2013

Arrived around 1pm, beautiful weather. River running fairly clear with on-off hatches of duns and mayflys. 7pm brought a spinner hatch. Very little visible surface activity but #16 and 18 pmd and parachute adams brought fish to the surface. Late afternoon was able to cast to rising fish. Landed many in the 14"-18" range with three 20"+. The larger rainbows here shoot straight up and out of the water multiple times before stripping line off the reel. The fishery exceeded my expectations. ~ GR -- June 21st, 2013

It was a beautiful day to fish the Little Snake River on the Sheep Mt. Ranch. Flow was about 100 cfs and the river was easily waded. There were a few small fish rising to caddis and PMD mayflies but all our fishing was done draging nymphs. Most of our fish were caught on size #12 BH Prince and BH pheasant tail nymphs as well as #18 or #20 copper johns. Three nice rainbows 16-18" were landed as well as numerous smaller rainbows and a half-dozen whitefish. All the riffles having a foot or more of water seemed to hold hungrey fish.The area fished was from the downstream boundary to a little above the guest cottage. ~ S. Richheimer -- June 16th, 2012

Beautiful sunny day on the Little Snake. Water was clear,very good water level and very wadeable. A lot of activity in the holes below the riffles using BH nymphs. Stayed in one spot several times to catch multiple fish out of the same hole. Lots of fish !! Used BH Princes, Red Copper Johns and Hares Ears to catch numerous Rainbows, Browns and Whitefish in the 6 to 10 inch range. Also caught some larger Rainbows in the 14 to 18 inch range. Had a couple lunker Rainbows on that I was unable to get close to the net. They toyed with me a while and then broke off. Steady caddis hatch through out the day and some surface activity. Caught a few browns on a #14 Elk Hair Caddis. The caddis were a little darker color than usual and the guides at the fishing store in Steamboat confirmed that the caddis were a little darker this year. Excellent day of fishing !! ~ Walt Jaakkola -- June 12th, 2012

Note: This report is from an RMAC member. I fished the Little Snake on August 23rd. Oh what a fantastic day I had!! The river was absolutely beautiful, cold and clear and perfect for wading. Starting at 8:30AM, I fished from the western boundary to the west parking area. Using a small Elk Hair Caddis I caught around a dozen ranging 12 to 15 inches in size. Feeding slowed towards noon so I tried a small Prince Nymph in deep hole and immediately caught a very nice rainbow around three pounds. I took a break until 4:00PM and then began fishing again with the Elk Hair Caddis. Around 5:00PM all sort of bugs started to appear on the water and a feeding frenzy began. Everywhere I threw the Caddis I had strikes. I caught a bunch of fish, I lost track of the number, including one HUGE rainbow that I could not put both hands around! He must have been five or six pounds and took several minutes to land. ~ Jimmy -- August 28th, 2011

The water dropped to about 60 cfs in the days before our visit and the fish were shy. My buddy caught two of the big cuttbows, 18-20 inches, but my biggest was only 15 inches. They took parachute adams or dropper beadhead phesant tails or green copper johns. A couple rose to elkhair caddis. It was bright sunlight and slow fishing. ~ John -- August 27th, 2011