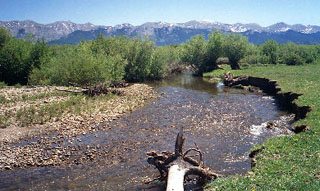 Description: Approximately 1.5 mile of this meadow stream, which averages 20 feet in width and has strong populations of rainbows and browns. Most of the stream has heavy willow cover with cut banks and deep holes. The property also has a 2-acre pond, wich is a nice size for float tubes.

Location: The property is located at the base of Cameron Pass, approximately 2 hours northwest of Denver.

The flows were ideal throughout the property. Fished very well all day, with the largest fish at 15" (rainbow). I was having the best luck with caddis, although a streamer with a sinking line on the deep pool adjacent to the bridge was also getting good strikes. Lower portions of the property produced the best results. ~ Paul Goodrum -- July 14th, 2017

Got a late start due to an alarm clock issue but had a great day on the stream regardless. Hopper/Dropper combos worked well - beetle / PMX on top, red 2 bit hooker / Prince Nymph down below. Landed 15 fish up to 14 inches... lower stretch provided the better holding water. ~ bh4buffs -- July 11th, 2017

Recent reports speak of fine dry fly action for rainbows and browns in the mid-upper teens, with a foot long brookie in the mix. EH caddis, Amy's Ants, yellow stimulator's and foam hoppers with green copper john droppers were the best patterns overall. There should be caddis present, as well as a few Drakes and Quills, and the early hoppers starting to show up. As always, bead head black wooly buggers dead drifted in the deep pools and cutbanks will yield hard strikes. ~ RMAC staff -- July 13th, 2016

I fished five hours on the 21st of August. Conditions were great and no wind. I caught and released 22 fish ranging from 6 to 20 inches. Best patterns were a rusty stimulator # 16 and a black beetle #14. A few took a ginger quill #16. Great fun all on dry flies. I am always amazed to hook one or two fish in the 4 to 5 lbs. bracket, and I an never expecting a fish that size. ~ Jim Hughes -- August 23rd, 2013

Only had a short time to fish so spent about an hour and half on the stream and caught several browns, mostly small until I hooked a 19" hook jaw Brown much to my surprise. Started with a hopper and kept it on the entire time. I'm sure a dropper would hve been productive but figured if they will take the dry why fight it.The stream is still flowing well for this late in the year so the deeper water and undercut banks were the spots to hit. Fished about a half hour on the pond on the way out and picked up 5 rainbows, all on black wooly buggers. Largest was about 15" but they were all very healthy and good color. With the Aspens in Fall color and catching fish it was a great day! ~ John Chandler -- October 2nd, 2011

Fished from 11-4 with minimal success. The water is low and the fish are deep in the holes and hard to get at. Caught a few dinkers in the bottom of the riffles but got tired of losing flies to the roots and stuff where the real fish are hiding. Lots of hoppers but the fish just are not coming up for their food. ~ MG52 -- September 12th, 2010

stream is low, and the fish are concentrated in the deeper holes.lost flies to the snags, but every time I managed to get a streamer under the cutbank I was rewarded with a strike.mostly browns from 12" to 18" but Idid land one very nice rainbow of 20". fished the pond in the afternoon out of my float tube and landed 6 fat, healthy rainbows all between 16"-20" buggers and a platte river special on the stream and damselfly nymphs and calibaetis emergers on the pond ~ Mick -- September 7th, 2010

I arrived early to fish this property for the first time. I was hoping to find the water level about the same of the previous reports but it was down considerably which reduced the fishable water. I fished a Double dry and Hopper/dropper rig from bottom to top with limited success. I think I landed 5 or 6 fish, mostly small Browns. One nice 14-15" Rainbow on the Hopper. Mid day I took a break and threw in the pond and landed a very fat, strong 21" Rainbow. I couldn't get and others to take my dries nor a streamer so I headed back to the stream and threw a streamer in all of the deeper corners. I got a fair number of fish chasing the streamer but only one eat and landed a nice 14" Brown. I am coming back to this property next year when there is more water. I scared up a cow moose (actually it scared me!!) up near the top of the property, beautiful BIG animals. ~ Stu Stout -- August 14th, 2010

Very nice property. Willows not a big problem, neither were the mosquitoes which was a surprise. Fished the entire day with a size 18 bead head phesant tail under a size 16 parachute adams. Caught too many small browns to count and one enormous 24" rainbow. Well, I didn't actually catch the rainbow as the BHPT pulled out of his lip with his head out of the water a foot from my net. Oh well, he wasn't going to fit in the net anyway. A herd of fifteen or so elk walked by in the morning. I heard them talking to each other with that strange high pitched "choo" they make before I saw them. No moose on the loose today. I probably could have caught some bigger browns on a cone head bugger in the deep pools, but I'd rather catch a seven inch fish on a dry fly than one twice as big on a streamer. ~ Chris -- July 21st, 2010

My wife and I arrived on the water around 9:30am and walked quite a ways down stream and worked our way back, picking up nice fish in several holes. Copper John and bead head prince seemed to work about the same. No activity on the surface except the occasional 10 inch brown. In the nice run just below the fence step by the river, I caught several nice fish on the way down and my wife caught so many on the way back her arm was tired. This was before lunch. In a nice run just up from the fence step, I caught several really nice rainbows and had several break offs with 6x and 5x tippet using prince nymphs. Changed to 4x and landed 4 before lunch. Came back to this hole after lunch and landed 6 really nice, fat rainbows, one resembling a football. Moved on upstream picking up nice fish in many of the runs. My wife picked up a few small browns on a dry fly, but the bigger rainbows were all on nymphs using a dry/dropper combo. I don't know how many fish we caught, but it was a lot. Nice clear day, pretty windy, and no mosquitos. ( probably thanks to the wind) ~ Rich Arnett -- July 6th, 2010