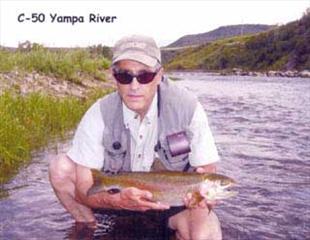 Description: The Utterback Ranch contains one-half mile of the 60-90 foot wide Yampa River. This section of the river is prime water for very large rainbows, browns, and northern pike.

Location: This property is located 11 miles west of Steamboat Springs, near the town of Milner.

Capacity: Limited to 2 anglers or 3 if in one group.

Prior to heading to the property, we stopped by Steamboat Fly Fisher to get some advice as they guide the Yampa as well as this property. We picked up a selection of recommended flies and headed for the property where we started fishing at 1pm under blue skies and temperatures in the mid-80s. We quickly noticed that the water was warm, not a good sign. Although I had no way of measuring an exact temperature, my friend Jeff and I agreed that it was well past 65 degrees. We fished relentlessly until 7pm with very little results. We tried various patterns of parachute hoppers and droppers, streamers large and small, and elk hair caddis. With the exception of a large fish that broke off an articulated streamer, it was a disappointing experience overall. The presence of cattle on this property has also contributed to widespread shoreline degradation. While I remain confident that this property can fish well, we neither saw nor caught any large fish. I suspect the high water temperatures were responsible. Maybe this property is better suited for spring or fall fishing. ~ Fabrice -- July 17th, 2013

The flow on this stretch of the Yampa River was low (~60 cfs) for this time of year but large rainbows were holding in and below most of the riffles.The weather was mostly cloudy and cool in the afternoon when we fished (1-4 pm). The three of us spred out and tried different flies but our greatest success was using an egg pattern trailed with a beadhead pheasant tail or prince nymph, although a few fish were hooked using a black zonker and/or woolybugger. All our fish (about a dozen total) were fat bows in the 16-23" range. ~ Steve R -- October 10th, 2012

Fished a sunny morning on C-50. Water temps were in the high 50's. No surface activity to speak of even though there were clouds of tricos all morning. I started throwing a streamer for the first hour with no luck. I then switched to a red san juan worm followed by a trico spinner used as a nymph or drowned spinner. A guide friend of mine provided me with this tip a few years ago and it has caught many fish. It wasn't too long before I hooked my first fish. It also happened to be the only fish I would get to the net, a nice 20" rainbow on the red san juan worm. I would go on to hook another 4 fish on the trico, but couldn't land any of them. Working my way back to the car, I decided to try the streamer again. I hooked a very large fish under the bridge that made a run and broke my 10.5 lb leader. It was a large fish. Had a great day even though I couldn't seal the deal most times. This lease truly does have large fish. ~ Vic Walker -- August 27th, 2012

Probably the most important thing about fishing this property is to double check your equipment to make sure it can handle big fish. On this pleasant Monday afternoon in early October the flows on the Yampa were good (perhaps 200 cfs) and the fish were hungrey. Went with my son-in-law who is an experienced fly fisherman and has guided on the Frying Pan and Roaring Fork. We used primarily a rig having a size 14-16 beadhead pheasant tail with a size 20 baetis nymph trailer. In the first main upstream riffle we caught several good-sized rainbows (18-20"). Then in this riffle my companion hooked a huge rainbow that took him down stream into the slacker water. He fought this fish for perhaps 15 minutes before it tired enough to bring close to the net. But before he could get it into his net--mine wasn't large enough but I could scare the fish upstream closer to his net--the line snapped! This was a great loss for this rainbow was about 26" and 10 lbs and would have been the largest trout my son-in-law ever caught. Afterwards he chalked the loss up to an old and weak 4X tippet explaining that he had not used the 4X in the last 2-3 years and it must have degraded with time. He left for the Green River the next day with new 4X tippet in hand, but greatly disappointed from lossing that trophy bow. Other riffles held fish but none could compare to the one that got away. ~ Steve R -- November 7th, 2011

I fished the property from 8-1 today. There’s lots of water and little time to figure it all out. From the parking space I worked my way up river and took the left-hand branch of the river. On the river, just past the fallen tree in water, that a bit of a riffle I got my only bite and fish of the morning. He took a red San Juan worm. He was big, maybe 20”, and made several runs. We fought for a while but he ended up in the net. I’m sure there were other fish in that run but none of them liked what I was offering. ~ Russ Lofquist -- September 26th, 2011

Flow on the Yampa at the Ranch was low (~110 cfs) but probably typical for early fall. It seemed like every run with some depth held large and hungrey rainbows. Numerous fat bows 20+" and 5+ lb were caught in the riffles. The most productive fly was a size 14 beadhead pheasant tail. However, trailing flys mimicing a BWO larva and emerger in size 20 such as the phesant tail and Barr emerger also caught fish. This is perhaps the best time of year to fish this property because most of the fish are concentrated in the deep runs or riffles, and between the bridge and the confluence with Trout Creek there are numerous such riffles and each one seemed to hold one or more large trout. ~ S. Richheimer -- October 10th, 2010

Nice property. Fished the Yampa near Steamboat earlier and was mossy, but this property not nearly as bad. Hooked big fish right off bat on small copper johns. Just for fun went to grasshopper pattern and caught six fish from 17 to the largest rainbow at 22". Rises occured but too small to mimic effectively. Fellow fishers did about the same. River low, did not need to wade except to cross river. Temperatures still cool and fish very healthy. ~ Greg -- September 7th, 2009

Caught one but he was over 24" and heavy. Caught by the rapids in the large pool by the big log overhang. ~ Mike Plante -- September 7th, 2008

Fished only from 4-6 PM. My 13 year old son got bored very quickly and decided catching frogs on the bank was more fun. Water was very warm and fish were rising, but sluggish. We each hooked one fish, but my son got impatient and we left just when I felt the fishing would improve soon. ~ Mike Johnson -- August 1st, 2007