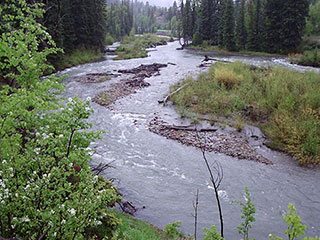 Description: The Club's mile and half of the Crystal lies directly upstream of the historic Red Stone Inn. The river here is 40-60 feet wide, containing brown, brooks, cutthroat, and many rainbows. Situated along the Crysal River and Kline Creek is a home belong to one of the landowner's that is available to Club members. Click on the VRBO link and enter Property ID# 296073 for additional information.

Location: This property is located 18 miles south of Carbondale in Redstone.

Brought a new fly fisherman to this property on a cool fall day. 29 degrees when we arrived but warmed up to the upper 50's on a sunny day. I fished a dry dropper/dropper rig. All my fish were caught on the lower dropper which was a purple Prince nymph. My friend nymphed fish with the trailing fly being a BHPT. We landed around 15 Rainbows and had a very fun day. The water is low at 98 CFS. ~ Ken B -- October 12th, 2017

Took a friend who did me a favor fishing on one my favorite fall properties to fish. We arrived around 8am(-3pm), 36 degrees, sunny and about 85 CFS so lower then normal. We only fished the bottom 1/4 mile, another group took the upper 1 3/4 miles above us. My friend had a good 30+ fish day that included Rainbows, Browns, Whitefish and even a Brookie or two. I mostly fished behind him and still did a good 18 fish. As usual, most were caught on Pat's Rubber Legs and a few on rainbow warriors and hairsears. Never had a bad day on this property. ~ George Schmidt -- September 17th, 2016

EPIC Day. 30+ fish day – lost count around noon at 24 fish, 15+ 18” or greater. I got tired of taking pictures… On the water at 8:00am, cool around 40 degrees and started catching fish on the second cast. Worked from the bridge up to the Castle, about half the fish on again (last year) Pat’s Rubber Legs, the rest distributed on Pheasant Tails and JuJu’s. On the way back decided to throw streamers small white with a second green/black chaser. Fish caught was a combination of Rainbows, RM White Fish, a few Cutthroats and a few Browns. I ended the day around 4pm. ~ George Schmidt -- October 11th, 2015

Heaven must be like this. I checked in at the Redstone Inn, got my badge and had breakfast there. I starting fishing about 9:00. The water was too fast to wade (about 215 cfs) at the bridge so I walked up the road a short distance and bush-wacked to the rivers edge. Starting with a Double Standard and a BWO nymph, I caught a 12" bow then a 17" (+/-) in the very first run. After the sun rose higher I found fish in nearly every bend, run and riffle. Most were taken with a Copper John with an egg dropper. Any color egg worked as did SJ worms. I had to leave shortly after noon to attend a wedding but, in covering about 1/3 of the river, I caught 30+ bows, none under 10" and a few over 20". What a great day! ~ Larry G -- August 4th, 2015

If no fish were caught here, the scenery is worth getting on the water. However, that was not the case.Slightly stained water from run off had things so visibility was lower. A couple of hours late morning with beadhead pheasant tails with some flash netted good size Rainbows 15-19" from a hole before water turned to chocolate. Short day here. ~ john Naill -- September 24th, 2013

Water conditions low... weather nearly ideal, temps in the high 50s, partly cloudy with an occasional rain/slush storm. 2 anglers landed 20 + fish ranging from "dinks" up to 20 inches. Mostly rainbows but we also caught a couple of small brown trout and 2 white fish. Effective flies were Orange Stimulator & flying ant on top, Purple Prince Nymph and Hare's Ear on the dropper. Several of the larger rainbows were landed on a Slumpbuster streamer. Highlight of the day was a simultaneous hook-up in the west pond near the middle parking area... both rainbows were 19 inchers. Great day on the Crystal River! ~ BH -- September 20th, 2012

A Torrential rain storm and mudslides the previous night left the river downstream of Redstone muddy and unfishable. Personnel at the Redstone Inn thought the club property may be in the same condition and recommended I check it before I started fishing. I started walking down to the river from the downstream parking lot and startled a black bear which was under a large pine tree. He took off upstream and into the woods. The river was chalky looking but not muddy. I fished from 8:30 to 5:30 and caught six rainbows in the 12 to 18 inch range and two 8 inch browns. I used BH Prince , BH Pheasant tail , egg patterns and Red San Juan worm patterns. This is a very nice property. I look forward to coming back next year. ~ Doc -- September 14th, 2012

Got on the river at 9 AM. Frost on the ground and vehicles. Water is low and clear. Very wary fish. Had to sneak up. Found some good riffles and some drop off pools. Landed a dozen or so fish, all but one before noon. Only one in the afternoon. High sun and clear day. All but one fish were rainbows, 8-12 inch. One broke off, guessed it at 15 inches. Caught one white fish. Used all small double nymph rig with BHPT 18, zebra midge with tungsten bead 20 or 22 and BH prince 18. This is both of our first trip here. Nice water, good stretch of stream. Will definitely return. ~ Brad Simpkins -- September 28th, 2010

This was the first time I have fished this property. I checked in at the Redstone Inn at 9:50. There were 2 other fisherman who had already checked in. I drove to the upper parking lot and started fishing around 10:10. I walked down river several hundred yards before I got into the water. I tied on a Elk Hair Caddis and a BH pheasant tail as my dropper. I immediately caught fish on both flies. I was able to site fish to numerous fish in the clear water. The fish were lined up in several runs and they would take my dry or the dropper. I landed 12+ fish before lunch. The largest was an 18” Rainbow on the Elk Hair Caddis. I had lunch from 12:00 – 1:15. A good thunderstorm came in and there was lots of lightning in the area. After lunch I drove to the lower lot to try different water. The 2 other fisherman were in the middle section. I continued to have great success with my same rig. The fishing was a little slower but I was fishing after the other 2 fisherman. The runs are deeper in the lower section and I saw numerous nice fish. My rig was not set up to get down to them so I simply moved on and continued to catch fish on the dry. I stopped fishing at 3:00. I landed 25+ fish. 1 nice Brown and the rest were Rainbows. A very nice river section and a beautiful valley. I would highly recommend this section of water. ~ Ken Blackburn -- September 1st, 2009

Fished from 10-5, sunny and seasonal with temps in 60s to low 70s. Thunderstorms in pm but that did not impair things much. Having looked at the RMAC website and talked to the people at the Redstone Inn (where we were staying), I started off on a Para Adams trailing a black copper john, caught a rainbow in a riffle on my first cast, and pretty much stayed with that all day. Caught 21 trout, and three whitefish, about 2/3 on the dropper, but more on the dry as the day wore on. Water level was low, and often trout were in very shallow spots happy to hit a dry. Scenery was incredible, and one of my favorite RMAC trips in a long time. Make sure you get back to the Inn for the 4:30-5:30 wine on the veranda! ~ Steve and Diana Fitzgerald -- September 27th, 2008