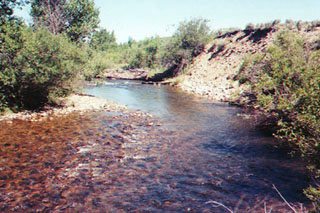 Description: This three mile stretch of the 20-foot wide Michigan River is characterized by curving cutbanks, with some riffles and fast water. It has not been fished much over the past 20 years and contains many mid-sized browns and rainbows, averaging 13 inches.

Location: This property is located close to Gould, approximately 2 1/2 hours northwest of Denver.

Fished this property very hard all day. The water is very low and the bottom is silted over with a lot of alge and I think the fish have moved accordingly. I saw a lot of insect activity but no fish activity. The Upper Mich. skunked me..... The further down stream you get the better the fishing - more water!!! This is just too nice of a prpoerty. They will return and so will I. ~ MG52 -- September 13th, 2010

Fished this property from around 8AM till late afternoon. Started at the lower parking area in the morning. Afternoon drove to the upper areas. Caught so many small brookies, I lost count. Mostly took caddis and stimulators. Also cought a few nice browns using Humpy near the banks. Several cattle on this property. No sign of Bullwinkle though. ~ C Schneider -- August 6th, 2010

Great little River - got there a little late (10am) and there were some clouds but pretty clear sky. Started at the middle and top sections - no real hatches going on, did not see any action on surface and did not see many hoppers so it was a day for nymphing - rewarded with a 20 plus fish day of bows, browns and brookies. Brookies were the smallest 8 inch or less then the browns up into the 12 inch range and the about 6 bows in the 16 inch range. Very soft takes - do not wait for the indicator to go under...... I used big and small bugs from girdle to ray charles to pt and cj's and they all worked. Use what your confident with. Fished the lower section late in the day and similar to the top only did not see any large bows - large bvr dam may hinder flows late in the year that could make it tough and did not see as many large holes and less cover - I was also moving fast seeking larger holes. Good Day - no storms and not very buggy either. Pics at: http://picasaweb.google.com/JWPembie/FishingMichiganRiverC47# ~ Jeff P. -- August 1st, 2010

Arrived at 9 a.m. in the morning, bugs were everywhere. There was a pretty good hatch of PMD coming off and also lots of caddis fluttering around. I started with a PMD, but had no luck. Switched to a caddis with the same result. After about an hour, I decided to tie on a yellow humpy with a PT dropper. Almost instantly I started getting hits. For the first hour it was probably 2 to 1 on the dropper, then almost all hits were on the dry after that. Somewhere along the way I broke off my PT dropper and didn't even notice. The wind had picked up a bit and was blowing clouds of caddis into the river. There were not as many rises as you would think, however any time I floated the humpy over a good spot, I'd catch a fish. The fish were holding right in the riffle with a few holding in the pools. The fishing was great up to the big beaver pond in the middle of the property. Warning, it's difficult to navigate. I didn't have much luck on the pond. Just one nice 15" rainbow on a wooly bugger. Above the pond, the fishing slowed. It could have been the thunderstorms that were blowing through. Not much rain, but a lot of wind. I did catch a very nice 16" brown in a deeper pool above the beaver pond. At about 2 p.m. the river shut down all together. Couldn't get a bite from 2 until I left at 4. In all I still caught probably 20 to 25 fish. Lots of brookies and browns from 8" to 12", only 1 rainbow. I saw several big fish through out the property, two very nice rainbows near the uppermost parking spot. ~ Vic Walker -- July 5th, 2010

Arrived at the river and began fishing by about 10:00AM. I caught a nice brown right by the bridge on my first cast. This is usually a BAD omen for me. It turned out that the fishing was just going to be that good today. There was a brief, but intense hatch of PMDs and Green Drakes, but the smallest fish in the river were eating them - and my size 12 H & L Variant. So, I went to terrestrials and caught all sorts of fish. The fish that were caught were all browns and brookies. The largest brown was right at 14". Most were under 10". The river is in prime shape with plenty of water and many, many beautiful runs and slips of holding water. The moose tracks were EVERYWHERE but I did not see one - which is a good thing! The water temp. was about 48 when I got there, and then rose into the 50s. I fished for only around 3.5 hours before the thunderstorms and BIG rains rolled into the valley. ~ Mike Murphy -- July 26th, 2009

Spent about 3 hours in the afternoon at this lease. Caught several small brookies in the stream on dry flys. Caught 10 16-18 inch rainbows on hopper pattern in about an hour at a large beaver pond at about the middle of the property - quit fishing there when it seemed more like catching than fishing. ~ Lou Miller -- August 5th, 2006

Good fishing on a hopper. Mostly smaller fish but one really nice rainbow about 16 inches. Caught a lot of fish and just had a great time. Water levels were excellent and the fish very active. ~ Michael John -- August 11th, 2003