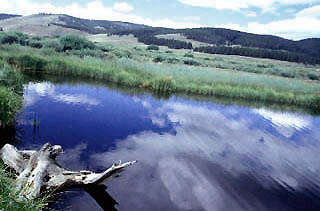 Description: The Hurd Creek Ranch offers four good miles of fishing on Ranch Creek, and two trophy ponds with large, cultivated rainbows. Ranch Creek is fed by 3 smaller streams that join on the property and at 40 feet across, it has good volume with riffles, runs, and cutbanks. Accommodations include log cabins and a lodge with all the amenities.

Location: The ranch is located east of Hwy. 40 between Tabernash and Fraser, approximately 1 1/2 hours from Denver.

Another great fall day at Ranch Creek! Second visit this season. Things started a little slow in the morning (35 degrees when we started), but once the temp went up, both myself and my brother had very productive days. Streamflow was reported at 24 qfs, and was quite clear. Did not cover much of the water -- really just from the cliffs to the upstream boundary. The 2 set-ups that worked best were a dry/dropper and a streamer. Parachute Adams, PMX, some other #16 dry I don't know the name of on top; #16 purple Prince on the bottom was great. I fished the beaver pond at the upstream border with a tan Scudzilla streamer, and caught at least a dozen there alone. My brother caught about 20 in just one stretch between the cliffs and parking area. In contrast to our last visit in July, most of what we landed were Rainbows, with a couple Brookies each, and a couple Browns. Also bigger -- most of what I landed on the streamer were rainbows 10-12+ inches, with a fat 17 inch and a 16 inch. My brother landed several fat RB's with hooked jaws. Mighty windy mid-afternoon, but did not interfere with very active fishing. Lovely day. ~ Jeff D -- October 14th, 2017

On July 21, 2017, before the massive cloud burst at 3 p.m. with striking lightning, the two of us caught about 17+ mostly browns in the 10-13" range starting at the far portion of the creek all the way down the hill from the ponds and parking lot. Saw no large trout. Water tea colored. We could see the bottom down 3-4 feet but the water had a brown cast to it. The plan was to fish this middle section first and work our way up to the upper section. Top water was the preferred fly of the day starting with Amy's Aunt, then parachute Adams, then various other bugs but no hoppers. The trout stopped striking anything at about 2 p.m. There was no major hatch in our area. ~ Gene -- July 23rd, 2017

Fished from about 930 to 6 with my brother and son. Probably our most productive day out of several visits to this wonderful property. Fish here are not at all selective. First hour for me was a little hit and miss while I dinked around with several fly combinations. Pretty much everything resulted in takes, including Stimulator, Royal Wulff, red Copper John, BH Hairs Ear, even an olive Woolly Bugger. About 1030 a hatch of small mayflies started and I switched to a #16 Parachute Adams. Next couple hours was quite active. My son stayed with nymphs all morning and reported one stretch where he caught fish on 5 consecutive casts; BH Pheasant Tail and red Copper John. My brother had most success on an orange Stimulator and Royal Wulff. In the afternoon I fished with nymphs the entire time with steady action. My brother had great success in the afternoon with Parachute Adams, and my son stuck with nymphs. I fished both the top end and the lower end, with a little in the middle. Most fish were browns, with a few brookies and one rainbow; most in the 8-10 inch range, though each of us netted at least one at 17+, and a few around 15. And yes, we each caught our share of fingerlings. Great day. ~ Jeff D -- July 16th, 2017

Flows were at a nice level ~17 cfs. Fish were small browns and brookies on dries. Mainly parachute adams. Spooky fish but a good longer cast worked well. Fished downstream from upper parking in the AM & upstream from lower parking in the PM. Lower water was a bit better but the walk is tougher with more marsh and scattered beaver holes. We did not fish the ponds. ~ Mike Narkewicz -- July 10th, 2017

Extremely windy, over the banks flow, clear water. Tough day and hard to find a drift in very swift water. I like the high flows here, but this was too much. Jungle fishing for sure. You may want to wait till the flows drop some. ~ Robert Schatz -- June 14th, 2017

My son and I fished the afternoon on this property. Parked at the lake, hiked downstream and fished back up between 12:30 & 4. Mostly small fish on the day and most were caught with stimulators on top (largest about 14"). Caught a few below with wolly buggers. Maybe 12 fish between us. Then fished the Fraser section from 4:30 to 5:30 and I caught another 5 fish...again smaller and most on top with a Stimulator. Flows were very good and not to high yet but would expect that to change in another week. ~ Jason Dembeck -- May 31st, 2017

pretty tough day at C45- water very low and lots of large fish stacked up in pools. Did manage 10+ fish on hopper dropper (green CJ) =mostly small browns 6-8"- 3 nice bows 16-17" on dropper and one on small WB ( black) - missed one large bow on hopper. Only fished down 500 yards from ponds and almost to upper boundary. Very nice property - have always enjoyed it and lots of water to cover. ~ BJameson -- September 22nd, 2016

Fished Ranch creek with a guest. Guest brought 5 or 6 to net, I brought about 20. Caddis and PMD on dries. Great hatch of white midges and PMDS at about 11 AM. Fished from lower parking area up stream. Lots of nice water. Ended the day with streamers on the larger pond before a big lightening storm ended the day. All in all great day. ~ Mike Narkewicz -- August 28th, 2016

Found the creek was color of dark tea or weak coffee--visibility about 1.5 to 2 ft. deep. Water temp in afternoon was around 50f degrees. Reported CFS was a little over 30 but it was too fast in some points to wade safely. I've seen and fished it at flood level and this was not anywhere close to that high. This water was about a foot below the edges of the banks. Flood levels overflow all banks and extend the creek as much as 10 feet outside the banks and into the fields. The trout were not as active as in the past where something will grab the nymph of almost every cast. I had about 12 strikes and landed about 3-4 medium sized brown trout of about 10-12 inches. A few of the strikes were of larger trout but they never made it to my net. Fished the upper end and enjoyed it. Only nymph that worked for me was a #16 bead head pheasant tail as the bottom fly. ~ Gene Morton -- May 24th, 2016

Excellent day. Overcast and lots of bugs. Fished double dries all day - small attractor trailing bwo with about equal takes on both. Fished upstream from upper parking area to boundary in the morning then walked down to cattle gate and fished up to ponds in the afternoon. One can easily catch 30-40 fish in a day if you are willing to cover a lot of water. By the time I got to the big beaver ponds below the ranch buildings I was too exhausted to fish them, so probably would start there next time. Mostly small browns and a few brookies. Nothing over 13 inches, but I suspect there are larger fish in the beaver ponds. Did not fish the two lakes -- owner holds big family parties on Memorial Day and Labor Day, so there were lots of people there - but I had the stream to myself. ~ Kathy Kanda -- September 6th, 2015