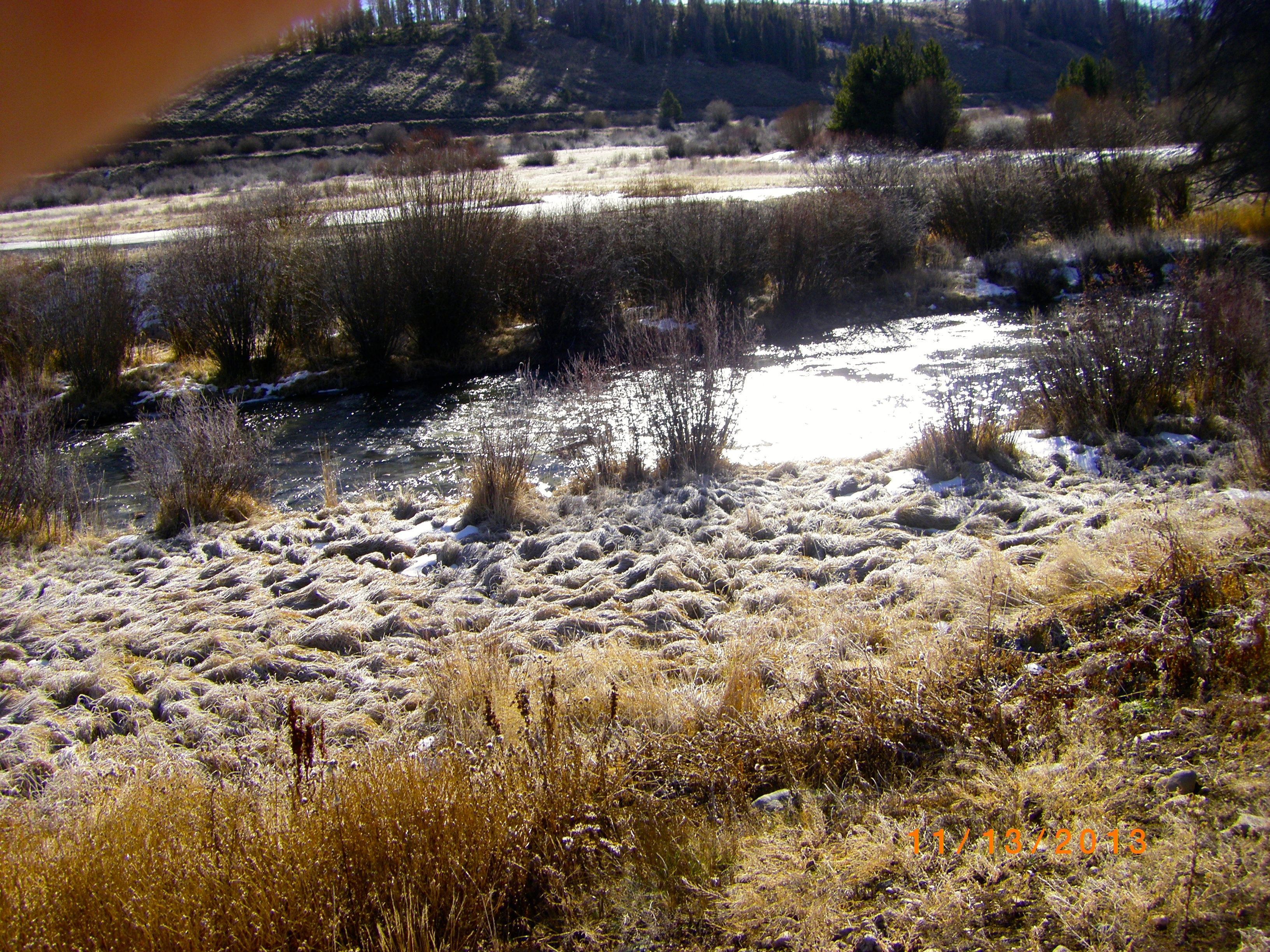 Description: This 15- to 30 foot wide section of the Fraser River encompasses a mile and a quarter of pocket water, deep bend pools and long slicks at the end of riffles. It is known to produce big rainbows, browns and the occasional brookie. Every known major western hatch is known to take place on the Fraser.

Location: Located just north of Fraser, Colorado off of Hwy. 40 and County Road 8.

Capacity: 2 anglers or more if in one group

Excellent day on the Fraser River property. As usual the directions are spot-on and the place is easy to locate. My buddy and I started late morning on a beautiful bluebird Sunday. I headed downstream to the boundary, and he started near the parking area and fished upstream. We were both getting action on dry/dropper rigs, I was using a small hopper and a variety of droppers. He was using a renegade with a prince dropper. We each caught 6 or 7 fish in this manner, most in the 10 - 12" range, with 15" being the largest. I switched to dark streamers in the early afternoon and quickly picked up 4 more fish, including a beautiful 16" Rainbow in a deep pool. We took a break around 3:00 and headed into Winter Park for an early supper at Hernando's. We got back on the river between 5:30 and 6:00 and this is when things got interesting. I headed upstream to the big hole beneath the house visible from the parking area, and proceeded to pull 11 fish out of there using a black conehead flash a bugger, while losing 5 or 6 others. The sizes were still modest, 10 - 12" but I had a ball. I ended up landing 19 fish before darkness drove me back to the car, with 3 of them being 16-18". There were some big fish lurking upstream of the electric fence, but I only landed one of them. My friend caught some fish on his dry-dropper rig, but unfortunately never got the streamer memo. This is a beautiful property filled with willing fish. As always it pays to keep trying different approaches until finding success. ~ Keith Campbell -- September 1st, 2017

Had high hopes for the Fraser today. Have fished the lease three times in the past with both high and low flows and have done well. Moreover spoke to a member who fished it several days ago and had a great day. Not today - despite what seemed like great flows, the river turned off for some reason. My buddy and I fished from 9-2 and caught about 15 fish between us. No hatches and no rises and no clear fly preference despite both of us finishing the day with packed fly patches. Mostly reluctant rises to caddis or stimmies and an occasional swat at various droppers - that's why they call it fishing. Ended the day with a Mexican stand-off with the big bull - let him win so he wouldn't feel bad! ~ ken cohen -- August 5th, 2017

Sweet day on the Fraser. Mostly sunny and the flows were right around 40 cfs. We started the day by working upstream from the parking lot, which proved to be the most productive stretch all day. Lots of great long runs and some pools to fish. We got fish right on away on a bhpt on the nymph rigs and stimis / elk hair on the surface. We continued to the top of the boundary and the action really picked up, we probably got 15 fish in an hour on the surface. My partner got a nice 14-15" bow in a small hole but most were taken in the riffles on surface bugs, one 13" fat Brown. Lots of animal activity, Longhorns, Horse, Deer and a resident Blue Heron. We lost count of fish, but it was easily a 30+ day, Browns, Bows, Brookies and a Cutbow. Really fun and pretty property, this would be a great place to take kids. ~ Brad Rettig -- July 23rd, 2017

Water down and just perfect, if anything a bit low. Lots of big fish on the prowl, browns especially. Diana and I had plenty between us, almost all on caddis, bhpt, copper johns (dark green and black), prince nymphs, and a variety of hatches in the afternoon. The pools had to be nymphed, but the riffles took fish on both droppers and dries. Get up there now! ~ Steve Fitzgerald -- July 7th, 2017

Fished on a cloudless day with the flows getting low. Fish were harder to find than earlier in the summer and lots of the riffles now too shallow to hold fish. Fish were either very tight to the bank or in the deeper pools, although caught a 17" rainbow in about a 12" deep riffle. Nothing hatching but occasional takes on caddis patterns with most of the fish taking the dropper, #18 red or green cj or hares ear. Fished to the top of the property and then changed to a small streamer on the way back down and caught about a half dozen on the streamer, typically within an inch or two of the bank. Overall about a 15 fish day, slower than prior visit but still lots of fun. ~ ken cohen -- August 29th, 2015

Due to repaving at Berthoud Pass I did not start fishing till around 11:30. I went upstream and fished to the top of the property. It was bright and sunny but I still caught plenty of small Browns and Brooks, mostly on Caddis dries. I fished the upper pond which was full of rising, eager to please, acrobatic 8-9" rainbows. A #18 red beadhead midge under a #12 Adams Para did the trick, with a slow retrieve. After a late lunch went downstream. the last fish of the day was an 18" rainbow in an impossible lie - I got lucky! Two warnings: the stream bottom is incredibly slippery with cleated felt boots a necessity, and there are longhorn cattle wandering about. The cattle did not bother me, but I did not get close to them either. Lots of water to fish here, lots of bank sippers too. Stayed overnight in Fraser so I could fish C45 the next day. See my entry on that. ~ Bob Hesse -- August 28th, 2015

beautiful morning, flows are getting a bit low, about 40 cfs so fish were concentrated in the deeper riffles and bend pools and occasionally tight to the bank. Fish were rising sporadically to caddis in the riffles. Spotty for the first 90 minutes with lots of dry refusals on numerous caddis patterns. Then dialed in to a #16 orange stimmie with a #18 red cj dropper. Fish were taking regularly after that, about 2/3 dropper, 1/3 dry. Size was anywhere from 6"-17" with the largest fish being browns tight to the bank in the deeper areas. Was looking for that cutthroat all day to complete a grand slam but no luck. Got stormed off the river at 1:30 with about 25 fish landed. Great day on the Fraser. ~ ken cohen -- August 17th, 2015

(this is for C42, not the Fraser, but not yet listed) Fished C42, the new Colorado River property for the first time. Described as a mile, but fishes much longer than that. There was a group of 3 other anglers there and I saw them only a few times during the day. The club description says it's a sowbug river (didn't read that until the parking area). Looked in my nymph box and lo and behold, there they were from an old Pat Dorsey fly of the month program, hiding next to the scuds. Caught about a half dozen on sowbugs in the first nymph run, across from the downstream fence-step. Sow bugs then shut off and caught fish sporadically the rest of the day on the usual suspects, prince nymphs, #16 green cj's and hares ears. The last half hour changed to a streamer and caught another three at the tail end of the nymph runs. Mosquitos were moderate, navigation was easy, great property. ~ ken cohen -- August 17th, 2015