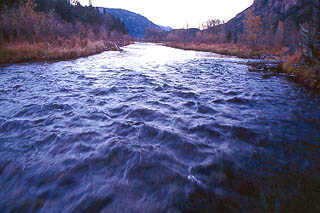 Description: Approximately 2 miles of 60-foot-wide high country river that winds through pastures and meadows. Browns and rainbows rise to late summer and fall dryfly hatches. Trout up to 20 inches have been reported.

Location: This property is located northwest of Antonito, Colo. below Platoro Reservoir near the New Mexico border.

Capacity: Limited to 3 anglers, or 2 groups of 2 each.

I was a beautiful sunny day with multiple hatches on the water. There were gray drakes and caddis early, giant stoneflies began coming off about 11am. I caught about eight fish, the largest a 20-inch rainbow, on a caddis. Later I used stoneflies and missed quite a few strikes but caught another rainbow about 18 inches. The trend continued the following day on the upper Conejos, B-37. ~ John -- July 19th, 2016

Tons of salmonflies, stoneflies, drakes, and caddis. Not as many risers as I thought there'd be, but #8 or #10 stimmy worked well along the slower moving banks. There are bows and browns here. DO KNOW THERE WAS AN ACTIVE CAT (or two) IN THE AREA. We saw a fresh deer kill and what we think was a juvenile snuck up behind my son as he sat along the banks of the upper stretch. He heard it, turned around, and it bolted. ~ TommyL -- July 7th, 2016

The fishing was good. Two of us caught about 14 fish which were 14 to 18 inches in length. Half were browns and half were rainbows or cutbows. We used large stonefly dries with some small blue-wing olives in calmer water. We also took a couple of fish on a small streamer in the morning. It was warm and very windy, which made casting difficult and a bit tiring. ~ John -- June 29th, 2014

As always, best property within RMAC--my opinion. Beautiful county and excellant river and fishing. My dad used to take me to the Conejos when I was a kid and always have loved this place. Fishing excellant with Caddis hatch in the morning with big rainbows on the surface. Landed lots of fish with prize 22" Cutbow. Size 18 Caddis did the trick. All fish were between 15 and 22 inches. Afternoon turned cloudy with heavy thunder storms and had nice afternoon stripping a Pat's Rubber Legs. Perfect day. ~ Russ -- July 7th, 2013

Fishing was good and the weather was warm and sunny. The river was at moderate level, and the water was clear. I caught some big fish early in the morning on wooly bugger streamers, but I couldn't get big nymphs to work at any hour. I switched to dries and caught fish on stoneflies, caddis, and emerger droppers. I used a midge pattern in the calm backwaters. There were no big hatches, but bugs (including maybe some green drakes) were fluttering around most of the day. The fish ranged from 10 to 20 inches. On the downstream half of the property they were mostly rainbows, probably stocked at some point, but I found a bunch of feisty wild browns near the upstream boundary. No cutthroats this year, though. ~ John -- June 19th, 2013

Water was clear and had come up after recent rains. Only fished until 1 p.m. but great fishing with 20 plus fish to net which included 2 really big rainbows and 1 very large brown. The fish were deeper and a Zebra Midge with a small-bodied, red San Juan Worm were best. Took fish on both. Water temperatues were in the 40s. This was fishing that bordered on exceptional. ~ Brad -- September 13th, 2012

Warmsunny day, but gusty at times. No luck with nymphs, but hitting on hoppers from 11:00 to 4:00 (parachute hopper and Joe's Hoppper). Fish were in the fast water. In the evening, when the wind died, good luck with size14 parachute blue winged olives, which were out and on the water. Fish were quietly feeding in the tail waters. As always on the Conejos, I had to work for my fish - Three Rainbows (one 19-inch) and 4 browns (up to 16-inch) caught and released. All fat and healthy. Great day. ~ Tim J -- August 15th, 2012

Two wonderful days on the Conejos. Wednesday had light morning hatches and picked up a few nice fish on Adams and Green Drakes. The hatches subsided early so went down with Black and Black/Tan Pat's Rubber Legs fishing like a streamer and caught 20 to 30 fish in the 14 to 22" range--two browns and a Rainbow over three pounds. Most of the bows were broad/thick healthy fish. Thursday the morning hatch was prolific and caught most fish on a Green Drake with an Adams pulling up the rear. Winds came up heavy around ); INSERT INTO `wp_rmanglingpostmeta`(`post_id`, `meta_key`, `meta_value`) VALUES (1230pm and forced to go deep again with Pat's Rubber Legs. Tried other nymphs: Golden Ribbed Hairs Ear, Prince, Pheasant Tails and Copper Johns but nothing worked as well as the Pat's Rubber Legs. Did not see any Stoneflys or Caddis; some BWO and PMD seen but in very small numbers. My father used to take me on the Conejos when I was quit small and I loved it then with my five foot fly rod and things haven't changed much since--still a wonderful beautiful place to spend time on a great trout stream. ~ Russ -- June 24th, 2012

Fabulous--No, Super Fabulous" I've been fishing the Conejos since 1979 and even though the flow was low it was absolutely the most unbelievable day of fly fishing that I have ever had. It was incredible catching so many large fish. Stoneflies of every variety were coming off--golden, brown & huge orange ones s8-s10. The stream was completely wadable. I netted about 40 fish with most of them 18 inches and above. The fish were really on the big bugs. ~ CC -- June 14th, 2012

It's a long drive but it was dream fishing. I caught and released 8 browns and 9 rainbows, all 12 to 18 inches, plus an 8-inch brookie. Many others slipped the barbless hooks. I tried some nymphs, but switched to elkhair caddis when the flies started hitting the water at 10am. At noon, adult stoneflies appeared and the fish hit on big stimulators. A few hours later big mayflies appeared, and the fish tore the feathers off some size-10 parachute Adams that I tied decades ago for unknown reasons. The fish were everywhere, including a calm backwater that was llike fishing a spring creek. The water was clear and wadable, although I was glad to have new cleats on my boots for crossing the stream. No mosquitoes! ~ John -- June 13th, 2012