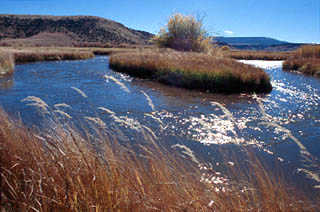 Description: Approximately 8 miles of stream with shallow riffles and cutbanks flowing through open pastures. Tract has produced 18-inch browns, as well as cutthroat and brookies. Camping is permitted.

Location: The property is located approximately 11 miles West of Saguache in Southern Colorado.

Have wanted to fish this valley for two decades and finally got down to do it. Beautiful high ranching valley with great views all around and a deserted feel to the properties. Endless bend pools and riffles winding through hay meadows. Fortunately past skeeter season, the place seems like it could be nasty with bugs in mid summer. Water was a bit off color, not sure why since no recent rain - maybe normal for this river? Not a but hatched all day and with cloudless skies, fish were tight against the banks wherever the water held some depth and shade. Would occasionally hit a dry but too close to the bank to try dry/dropper so eventually changed to a small streamer. Fished with two buddies and averaged 20 fish each. Mostly 8-12" browns, rare rainbows, and about a half dozen nice browns in the 16-17" range. Great day all around and only fished half the lease! ~ ken -- August 29th, 2017

My brother and I made our 3rd visit to the Saguache Creek properties, the previous 2 having been spectacular, with gorgeous days and incredible fishing. This time around we got the spectacular days, but poor fishing. The entire stretch of the creek (all 3 segments) was muddy and impossible to see more than about 6 inches down. Rumor has it that it was the result of a big storm up on the pass, but no way for us to verify that. As a result the typically good fishing was super disappointing. Where we'd normally caught 20+ a day each, we didn't manage that number together over the course of two very full days. We even took the Club's advice and tried an early morning visit to catch the morning BWO hatch - to no avail, except for the lovely sunrise. We tried everything - nymphs of numerous varieties, hoppers, PMX, BWO, even streamers. Fish were few and far between - browns in the 12-14" range, a few rainbows similarly sized and even a cutbow. And for the first time, we actually encountered other RMAC members on the water. ~ Peter D -- September 16th, 2015

The weather was terribly hot but the fish didn't mind. During two half days of fishing, I released more than 20 trout, 10 to 16 inches long. They were all browns. This was the first time in 7 visits to the creek that I didn't catch any rainbows or cutthroats. The browns were surface feeding and took hoppers, elkhair caddis, and stimulators. In the early morning, I caught some on wooly bugger streamers. The water was a bit murky but at a good level. ~ John -- July 24th, 2014

Fished the afternoon, sunny and warm. Water was brown and clear on the edges, but still caught fish very close along the banks from parking area upstream. Size 12 Amy's Ant and olive Parachute hopper on top with BH prince or pheasant tail dropper - all caught fish with 15 inch rainbow the biggest. Wind picked up late and went to streamer - black slump buster and caught 3 more rainbows. ~ Bruce Kautz -- August 18th, 2012

The creek was about the right level, but the water was a bit murky. The fish held even tighter to the banks than usual, so I had trouble fishing nymphs. I caught a couple on pheasanttails and a couple more on pale morning dun dries when there was a light hatch. I took far more fish on small wooly buggers with rubber legs. I slapped the streamers right next to the bank and caught a total of about 15 fish, 8 to 16 inches long. There was one rainbow, one cutthroat, and the rest were browns. ~ John -- June 13th, 2012

The creekis running 35-40 cfs, just right for fly fishing. I caught about 20 fish on Friday, 10-15 fish on Saturday. All were browns except for 2 cutthroats (on dries) and 3 rainbows (on streamers). One bow was 17 inches, biggest fish of the trip. There weren't many risers showing, but the fish readily took elkhair caddis and hoppers if fished close to the bank. They also took small wooly bugger streamers, and sometimes small prince and hare's ear nymphs. It was hot and the fish stopped hitting about 3pm, until it got dark at 8pm. Mosquitoes were bad below the campsite, but absent above the campsite because that stretch has not been irrigated. ~ John -- July 25th, 2011

I didn’t get skunked! I was on my way down to the Rio Grande for some floating and I’ve been wanting to check out this property for awhile. Conditions seemed pretty good. Just over 100 cfs, but very fishable. Visability was maybe a foot, could have been better but, I didn’t get the impression this stream is ever gin clear with the cattle and horses. Started fishing in the middle of the property about 1 PM and conditions looked great for streamer fishing. So I hit it hard for a few hours downstream.......nothing. Decided to nymph some back upstream....nothing. Tossed streamers again til 5 PM and picked up a couple 12” browns. Time of day and water clarity were probably the biggest factors. A couple of days later could have made a big difference. Great looking property just have to time it right with the flows. ~ Rob -- June 19th, 2011

Really beautiful ranch and teaming with wildlife. A wild turkey was calling and too many bluebirds to count. Had a late snow storm blow through today which made things tough. Didn't catch any fish but my buddy had one definite strike that he missed (may fly nymph in a size 18). We did see one small 6" fish but it looks like the area is routinely grazed and the creek shows it. Had a great lunch at the bakery/cafe in Sauquache ... closes as 2PM and worth the 15-minute drive to town for sure. Great destination for the scenery and wildlife but pretty weak on fish. Better luck to the nexy guy! ~ Ranger Ken -- May 2nd, 2011

I fished the Saguache for the first time last fall with the friend who taught me how to catch a trout with a fly over 25 years ago and insisted at that time that I'd sell all my spinning gear within five years. He was right. And the fall afternoon motivated me to return, this time alone. I walked downstream from the bridge this year at a fast clip for 15-20 minutes and cut over from the meadow below some modestly significant shrubbery. Consistent with my reputation as somewhat of a dullard I had decided what I was going to use while driving up from Santa Fe. I can't stand gearing up streamside as I always tend to fumble like a 10 year old boy due to a congenially twitchy nervous system. I started with an orange foam-bodied hopper with this #18 greenish bead-head deal sporting itty-bitty rubber legs, some kind of modern impressionistic emerger I imagine. I'd tell you the name of it but given my intermittent difficulty remembering my sister's name it'd likely as not be inaccurate unless it were a gold-ribbed hare's ear or chernobyl ant, names at opposite ends of a purist's spectrum but which hang around the corner's of my subcortical structures like hairs in a biscuit. I landed 15 fish on this rig and had at least 3-4 times as many hook-ups, bumps, and solid strikes. Most were colorful, 10-14" browns that reminded me a great deal of the brookies I caught growing up in New England - big heads and hook-jawed with Ghandi-like bodies. About half-way back to the bridge a 16" rainbow hit and was lip-caught but faught like a San Juan, Texas hole 20 incher after a rough girls' night out. Unfortunately, I believe the lackluster effort more an indication of ill-health than on my own proclivity toward aggressive ethanol ingestion and subsequent dues-paying. She weren't well. Having started a bit after noon I wended my way back to the car around 4 pm. Action had slowed but not ceased in the last hour or so. I thought I was done but a little R & R, a cold beer, some music and A/C revived me and at around 6 pm I head upstream. In the first significant 90 degree angled hole bending right I took a stunning 20" Rainbow that was absolutely slab-sided - as healthy and strong a fish as the former "largest" fish of the day was weak. If this was a "plant" it was definitely a holdover as the color was terrific and it absolutely bolted back in after a moderately (too) long struggle against my 3 wt. rod. Black wooly bugger. I thought this an omen for a good hour or so of buggering (don't even go there) to end the day. Nada de nada thereafter. My humble tips for fishing this stream: don't get in the water. Pick your side and stay there, bypassing good water in order to avoid crossing - there's plenty of water to be picky. Didn't catch a fish if crossed within 3o yards above or below a hole/run/undercut bank and hardly missed a fish with careful approach despite my graceless casting, clumsy knot-tying and overuse of heavier tippet than necessary. And the water was exceptionally clear. Stayed at the mineral springs right at the junction of Hwy 285 and 17 - pricey at close to a hundred bucks but very convenient, the springs are great, and it's a good launching place for points north or south. I hit the Conejos for a marvolous 4 hours the next day. Tight lines! ~ Jon Boren -- August 17th, 2010

What a delightful place. Self and two guests had the run of the valley for the day - and a perfect day it was, cool, no wind, flowers out all over the place, great peaceful scenery. An oh ... the fishing ... well, actually excellent. Fish everywhere in the morning pretty much right where they should be - but very tight against the banks. A small hopper was my ticket (with very little action on the nymph dropper) although my brother did better on nymphs under an indicator - but anytime you have over 30 hits in the morning on the surface - there's nothing to complain about. After lunch things changed a bit and the fish turned off. One savage strike from what seemed to be a much much larger fish from under a cutbank to bring us back again. Very pleasant. ~ Harry Briscoe -- July 29th, 2010