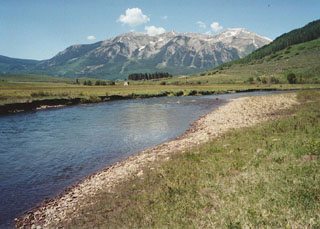 Description: The Cold Springs Ranch, near Crested Butte, has 1 1/2 miles of the 40-foot wide East River. Few anglers have ever fished this section of the river, and it contains good populations of rainbows to 16 inches and browns to 18 inches. Available on odd days only.

Location: The ranch is located approximately four miles east of the resort town of Crested Butte.

Capacity: Limited to 3 anglers or 2 groups of 2 each.

Fished in the afternoon. There were thunderstorms around so I did not go too far from the lower end and the car. I caught fish on Chubby Chernobyls, Bead Head Pheasant Tails, and large black streamers. No hoppers around, no mayflies or caddis. Fish were in the riffles and pools. Caught some nice 12" -14" fish, lots of dinks, no big fish. Beautiful spot!! ~ Robert Hesse -- September 12th, 2017

Beautiful cloudless day on this magnificent property. Finally met the owner after fishing here for 20 years. Flows were great and fished with two buddies. No hatches all day but consistent fish willing to take droppers and the occasional swat at the dry. Most action on small beadheads, PT's CJ's with caddis and small hoppers on top. Caught about 20 fish each, from 4" up to 15" in the usual spots, riffles and bend pools. Views to die for, always a good day on the East ~ ken -- August 29th, 2017

Didn't really have the time I would have liked to have on this section. However, in 4hrs I caught 8 fish. Nothing over 16 inches. Dead drifting streamers through the holes is what worked for me. Green or Black wooly did the trick that day. I will return to that section. I am sure there are hogs in that creek/river. ~ Rod M. -- September 11th, 2016

Great news that B26 is back on line. Have fished this property about 8 times over the years and definitely one of my favorites for dry/dropper rigs. Nothing on top in the morning but about a half dozen nice fish on streamers on the lower bend pools. Switched to #14 foam body caddis with #18-20 dark green copper john's about 11 AM. Rest of the day caught mix of 8-14" brown's, one nice 15" cutthroat and rainbows from 12-20" (the latter courtesy of the club having been deposited the day before). The nicest scenery of any club property and fun to fish as well! ~ ken cohen -- August 6th, 2015

If there is a more beautiful place on earth, I'd be surprised !! Scenery here is stunning. Fished from 9:00 to 4:00. Rained off and on until about 2:00. Started nymphing and the fish were hitting my strike indicator. Switched to an orange Stimulator and BH Pheasant tail dropper and fished this rig the rest of the day. Caught about 15 fish including a 10" and a 14" rainbow. Both were fat and healthy. Rest were browns in the 4-8 inch range and one cutthroat. I had numerous strikes on the Stimulator but missed at least twice as many as I caught. Best fishing was the upstream half of the property. There was more water and deeper holes. Many of the browns and strikes were also in the shallow riffles. ~ Walt Jaakkola -- August 20th, 2010

LaMar Jost and I fished the lease for about 3 hours in the late afternoon and evening. Nothing much happening. Only one fish brought to the net. I covered a lot of water with streamers, but didn't cause any fish to move that I could see. LaMar caught one rainbow on a black beauty and hooked up with a couple more he didn't land. Weather was cloudy and warm, about 60 degrees. Saw a few BWOs coming off and one yellow stone, but only one riser spotted. ~ Mike Williams -- October 3rd, 2008

The river looks lower than remember, but that was two years ago. I caught several nice fish on red and green Copper Johns hung as dropper from a BC Hopper. Several fish took the BC Hopper. I switched out the BC Hopper for a yellow Stimulator and caught two fish taking the Stimulator. The real action began when I went with just a red San Juan Worm. On the first cast of this rig in a deep pool near the loan pine tree something very big hit the worm and broke me off without even slowing down. I replaced the red worm and caught five fish 10 14 near or under the bridge. It was a beautiful day on the East River. ~ Russ Lofquist -- August 13th, 2007

What a lovely property and great fishing. Nothing huge but nice numbers in the am and late afternoon. They were taking nymphs (copper johns especially - red ones) as well as Yellow Sallys of all things. Nothing else seemed to interest them. Most fish were nice - 12 - 14" consistently and healthy and strong. Look forward to trying it again. ~ Sally Fant -- July 11th, 2006

My new favorite river is the East. When I pulled up to the parking spot I knew this was going to be special. On the downstream side of the bridge I caught a nice 15 Rainbow on a Hopper Dropper. He nailed it! I wanted to fish under the bridge as the water was low and it provided the perfect cover. I caught four fish under that bridge with a red Copper John as a dropper. One of them was over 20. As the line sunk down under the bridge I thought the first two fish were snags. Ill take that kind of snag anytime. Moving up river the Hopper Dropper was interesting to some fish, but the action was very slow. After lunch I moved back down to the lone pine tree at the property boundary. Moving up to the first big left hand bend in the river the action was incredible. Fish after fish hit the Copper John. Then it happened, that big snag was back and it turned out to be a 22 Rainbow. He fought hard as you can imagine. He ran out and then back in. I thought I was going to loose him several times. Finally he made the net. Easily the biggest trout Ive ever caught! ~ Russ Lofquist -- September 13th, 2005