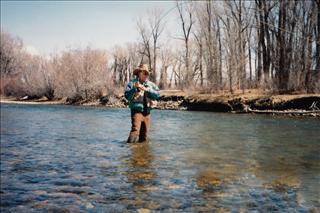 Description: Over 1 mile of this famous Blue Ribbon river. Big rainbows, browns, and a run Kokanee Salmon in the fall. Large river surrounded by huge cottonwood trees with long runs, islands, and deep holes. Available on even days only

Location: The ranch is located halfway between the towns of Gunnison and Almont along Hwy. 135.

Tried to fish the Gunny with two buddies today. Have fished this property a dozen or so times over the years and access is the main problem when the flows are high. The best access to the lease is from the far side of the river for most of the runs and crossing is anywhere from moderately difficult to near lethal depending on the flows. Surprisingly for late August, the flows were in excess of 800 cfs which is in the near lethal category. Tried to cross at all the usual spots and could not safely manage it. Aborted early. ~ ken -- August 29th, 2017

1st time to this stretch. Snowed overnight so any path or trails were covered. The best hole we found was down river from the parking lot where a water diversion area is. A big bend riffled into a very inviting deep run. Kokanee salmon were in full spawn along the shallow riffles and the rainbows were being opportunistic. The egg color coming from the Kokanee was orange and small.Hard to believe but the Kokonee were eating a 24 Wd-40. Im convinced they were not snagged at it repeatedly kept coming back in the mouth. Landed at least 20 rainbows and brown ranging from 14-17inches. If anyone has fished this water and has another hole in the stretch that should be fished send me a message. ~ Woodsie -- October 9th, 2016

I have fished this property many times and knew that wading would be difficult at the 1100 cfs flows. That being said, the fish were active below, nothing on top. Where we could safely get into the water, we caught fish regularly on double nymph rigs, using stonefly patterns in front and #18 mayfly nymphs trailing. Fly selection not too important if you could get your fly in front of fish. Top of the property fished better than the bottom at these flows. Propery fished best at flows of 600 and below. ~ ken cohen -- August 6th, 2015

Gunnison River Larger water here. Several combinations were used without much success on upper stretch. Only one Rainbow and one Brown were taken- each about 12". Thunder and rain at mid -day caused temporary stop, but back on till sundown. We woulb probably start on lower end next time. ~ john Naill -- September 24th, 2013

First time fishing this excellent property with a buddy. Flows were still high, just over 600 cfs. Found large and healthy fish within 10 feet of the bank. Tried a selection of nymphs but all fish were caught on Pat's Rubber Legs/girdle bug in black/orange. We did catch one nice rainbow on a San Juan. Fished from 9-2 and had to quit after buddy broke his rod on said rainbow. Landed a couple of browns over 15 inches. Only challenge here was finding property boundary on downstream end, did not see any RMA sign to indicate it. Would definately fish here again! ~ mwooster -- August 12th, 2013

Fished a half day in the afternoon and fishing was a little slow on the Gunny. Water was a little off color and higher than it had been a few weeks prior when I was there, due to the recent rains they had received. Caught fish on 20 inchers, epoxy stones and PT's. Also, had a few fish hit on top on olive Stimulators. Caught Bows and Browns up to 15". ~ J Stringer -- May 8th, 2013

Three of us fished this property for the first time from about 10:30am to dusk and landed 30 fish total. Bright sunny Fall weather and very low flow (122 cfs) made for challenging condititons but fish were had if you worked for them. Most caught in riffles on red CJ, while fish landed from deeper runs nabbed a #20 sparkle RS2. A couple of well earned nice browns were fooled by a #20 CDC compara dun on top. Largest was 18" rainbow, with a couple of browns of about 14". All the rest ranged from 6" to 12". Great day, great property and enjoyed watching the three sets of massive antlers keeping tabs on us. ~ S. Knopp -- October 7th, 2012

Flow on the Gunnison River had been quite low all summer and on this day it was about 150-200 cfs. As a result this stretch of the river had not been floated since early summer and the fish had seen little pressure but were quite hungry. We went down to one of the deepest pools near the lower end of the property. This was the only spot were we could see kokanee salmon hanging out and used and egg pattern trailed by a beadhead pheasant tail and prince nymph. Caught numerous rainbows using this rig and a couple of salmon as well, and one or two browns. The upper riffles which had no more than a foot of water also yielded some bows. After about 2 hrs. of fishing we were blown out by a thunderstorm and retreated back to our cabin on the Taylor River north of Almont. ~ Steve R -- October 6th, 2012

Fished two days on this nice stretch of water. My fishing partner who has fished this lease 8 or 9 times previously in the years the club has had access said he has never really been able to cross the stream but this was achievable in many areas. Three of us did very well on the 11th using any stone fly on top (Twenty Incher or Prince) and anything bead-headed, small and green as a dropper (chartreuse copper john or bead head flash back pheasant tail). We each landed around 20 fish with the whoppers being a 23" rainbow and a 20" brown. Skies were mostly clear and air temp made it up to around 76. Went back on Monday the 13th to mostly cloudy skies and some finicky fish. Mostly the same patterns were working but the fish were far less aggressive. Managed about half as many fish with the winner being a 22" brown and 20" rainbow. All the fish were very healthy. If you fish this lease it is worth the trip to head up the road to Almont and stop by the Willowfly Anglers to find out what is working. Great staff there! ~ Mountain Moose -- August 14th, 2012