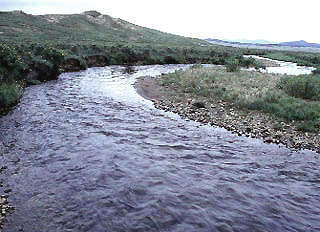 Description: Four plus miles of Upper Tarryall Creek, averaging 10 feet in width. Endless bends and runs with deep holes, cutbanks and beaver ponds with excellent cover. Browns are dominant and range to over 16 inches. Easy stream to fish with dries. A tremendous fish population for its size. Great for kids

Location: The ranch is located east of Hwy. 285, south of the town of Jefferson and north of Fairplay in South Park. There are two parking areas off two different county roads servicing the upper and lower sections.

This place is teeming with samll/medium browns. Took a couple novice anglers, as this is a great place to get new anglers used to casting in a small river. Strong bite starting about 9am, and just about anything dry or emerging, which petered out by the time the storms came at about 3pm. Stealthy angler with a good cast can catch a fish in every bend. Beginners caught a handful each. We found one pretty brook trout and saw flashes of some large browns (maybe a rainbow or two?). If you go focused on bigger fish with a deep dropper or streamer you might find them. ~ M. Murphy -- July 10th, 2017

Very productive day on one of my favorite RMAC properties. My brother and I fished from about noon until a little after sundown (wanted to let the Labor Day traffic clear out). A little windy but not bad for South Park. Pretty much everything we threw worked, some just better than others. Started with a Dave's Hopper that was very productive, and was big enough so the little fingerlings usually missed. Switched to a foam hopper for a while after I lost the Dave's, and that was OK. After a while tried a #16 caddis and caught quite a few -- including some puny ones. Tried a leech and a pheasant tail, both of which worked. At about 4, switched to a PMX, and the next hour was great. Caught plenty in the 8-10 inch ranch, but also quite a few 10-12", a couple of 13", a couple 15" & a 16". And, a ton of 3-4 inchers. Action really did slow down after about 5, but I got an aggressive take (which I missed, dang it) from a giant with a mouse pattern during that time. All fish were browns; water was pretty low. ~ Jeff Downing -- September 6th, 2016

Great day. Fished from lower parking area with brother, nephew (18) and son (15). Morning was a little slow at bottom part of ranch. They left around 3pm and I stayed till 5pm. We rocked after lunch - especially above the ladder over the fence, through the willow section and up to the beaver ponds. Great hatch of small caddis and yellow sallies. Fished mostly dries all afternoon and got 20-30 fish with a fat 18" rainbow and browns with bulging stomachs between 6-18". size 12 caddis did the trick for me in the afternoon , and brother used #12 prince in the morning with success. great views and nice fish. late afternoon lightening drove me off the property. ~ Paul Westerhoff -- July 8th, 2016

Pretty good day at A-7. We parked at the lower lot and walked to the downstream boundary. We were skeptical because the water was the color of chocolate milk and moving fast. Flows were about max for this property ~55 cfs. But, pink was the color of the day! There were three of us and we all had success on pink san juan worms, pink sowbugs and baetis. You really had to pick your spots to have any chance, up against the banks in the slower moving water is where we had success. We caught 7 browns 8-13 inches, it was a ton of fun and a really pretty property. ~ Brad Rettig -- June 6th, 2016

This was my first visit to A-7 and I loved it. Probably caught 20 fish in less than 3 hours. Started at lower fence below lower parking area and worked upstream to the next fence. Started with stimulator trailing purple BH prince and RS2, which I cut off after slapping myself in the face with a couple 2-inch fry. No need to change rig after that as fish eagerly hit both the dry and dropper. My 3-wt. glass rod was perfect for this water. Largest fish caught were 12-14 inches. Got to the river around 10 and takes were pretty much non-stop until mid-day sun heated up. Left early to beat Sunday traffic, but was rewarded with bull moose siting just past the Kenosha Pass summit. ~ Kathy Kanda -- August 31st, 2015

Taryall a little slow today. Nothing on top and 90 minutes of steady rain at noon. That being said, not too much wind and overall caught about 15 fish on dry dropper. Fished all day with a #14 stimulator and various droppers. #18 hares ear most effective. Fish were in the usual locations - tight to the bank and at the tail end of the bend pools. Probably would have been a good streamer day but I was into fishing drys. ~ ken cohen -- August 6th, 2015

started early, at about 9 AM and the fish weren't moving much. Caught just a couple on a caddis and then quiet until about 11:30 when a sporadic hatch triggered feeding. Caught a half dozen on a #16 yellow stimiulator then got rained on for 90 minutes. When the rain fianlly stopped, fish were feeding intermittently, all on the stimulator. After a half dozen failed droppers, finally just finished the day with the stimmie. Caught about 15 total, all browns, 7-13". Fun day but had to work for the fish. ~ ken cohen -- August 1st, 2015

Great day on A-7, one of my favorite properties. Went with my brother, his son and my daughter, who had never fished before. Water was still high for this stretch, but pretty clear. Morning was really busy and everybody saw a lot of action. Used big attractors: Yellow Humpy, Orange Stimulator, PMX. My novice daughter got 5 takes in the first hour or so, landing one -- the poor timing I attribute to crummy instruction from her guide. Everybody else saw steady action, caught a bunch. All Browns, a few 12 inches or a little more. Nobody bothered with nymphs since the action was so good with dries. About 1 pm weather moved in, got windy and rainy for about an hour. Weather calmed down after 2 and action slowed, but still caught fish. Only downside is we sort of forgot about the stinking Sunday afternoon traffic and the drive home on 285 was excruciating. ~ Jeff Downing -- July 20th, 2015

My friend Ed and I had a stellar day on A-7. We fished from 9:30-4, with no breaks for lunch. The fishing was too good to stop. Weather was perfect - short sleeve weather, not too hot, not too cold. And no rain (though it appeared to have rained a lot in the days preceding our visit)! The mosquitoes, however, were voracious (bring the heavy-duty DEET). I was a little worried as the flows jumped up the day before we got there - went from around 110 to 140. This added a little bit of color to the water, which probably was a good thing. I ended up with 27 fish in the net, including my first ever two-fish-simultaneously-landed-from-a-double-dry-fly-rig. Ed was well into double-digits as well. Fishing seemed to shut down after 3:30. Most fish in the 10-12" range, but they were good fighters. Suggest a lighter weight rod - I was on a 5-wt, but a 3 or 4 would have been plenty. I didn't even bother nymphing - didn't need to. Ed tried for a little bit but found more success on the surface. The big flies were Yellow Sally dry flies (big, like size 10), and Yellow Humpies (again, big - maybe size 12 or 14). Most takes were on the Humpy. Yellow seemed to be the magic color. We spent most of our time on the lower section, below the willows. The willows are fishable but a shorter rod (e.g. 7' or 7.5') would be better. The fish are hanging out where you'd think they are - small pockets, under the cut-banks, and in slow/medium water. Don't spend too long in a hole - usually you get one attempt in each hole. If you miss a take or land a fish, move on to the next hole. Can't wait to fish this property again! ~ Dan C -- July 16th, 2014

Had an excellent day on A7 with my son. It was a great property for him to learn with fish hitting a dry at almost every bend in the river. The fish were extremely active from about 10-12, but shut down after lunch. We caught all browns between 12-14 inches, mostly on yellow humpies below the lower parking area. ~ Jared -- July 6th, 2014