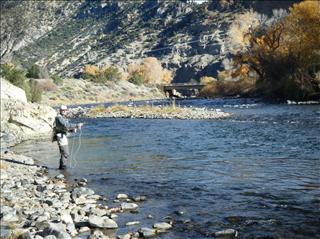 Description: The Club shares this outstanding 1.5-mile lease with the Arkansas River Fly Shop in Salida, and members are asked to check into the shop prior to fishing to receive their beat assignment and a detailed map. Club members have access to two beats on the south (highway) side of the river to midstream. This prime trout water is filled with classic riffles, pocketwater and deep pools. containing wild brown trout with fish ranging from10 to 18 inches. Hybrid Hofer rainbows have been introduced to the river and can run from 14 to 18 inches. The Arkansas is known for incredible hatches starting with blue-winged olives, then the ""blizzard"" of caddis followed by stoneflies, PMDs and terrestrials. Members will enjoy a long wade season.

Location: The Club's two beats are located approximately seven miles below Salida between Wellsville and Swissvale.

1st trip to A6, nice stretch of water with plenty of variety. Temps in 30s with winds up to 25 mph made for a challenging day. 3 of us landed 10 fish between 10-16 inches, combination of browns & rainbows. All were hooked on Copper Johns trailed below big Golden Stone. Good day on the stream despite the ice in the guides. ~ BH -- February 21st, 2014

Hard day's work by the two of us for 19 trout, 3 rainbows and the rest browns. Went into backing during the runs of two 14" browns. These trout are healthy and strong. Prince nymphs proved to be the most reliable pattern but caught many on black caddis, tan body grasshopper, Kingery stone fly, and tiny beatis nymph. . ~ Gene -- July 13th, 2013

Challenging but very fun day on A-6, first time fishing this excellent lease. Had 4 of us and access to both beats thanks to Greg and Co at Ark Anglers (awesome shop and great people btw!). We fished the upstream beat from 11-3 with lots of healthy browns and bows taking BH Prince Nymphs but more on large yellow BH stonefly nymphs. We got a few strikes on top using crystal stimis but all fish to net were on nymphs. About 25 fish for us on upstream beat, things really slowed/shut down in afternoon on lower beat. Fish were very close to bank given 900 cfs flows. Flows will keep coming down and fishing should be excellent here over next few weeks. Great stretch with highest concentration of trout per mile on Ark according to Greg at Ark Anglers. ~ MWooster -- June 23rd, 2013

We had a good day on the river. We caught both Browns and Rainbows. The Rainbows we very acrobatic and went aerial several times. The Browns kept their heads down and pulled hard. We were fishing a variety of flies but were most successful with black stone fly patterns trailed by Prince Nymphs. We also took fish on caddis nymphs and blue wing emergers. We caught all of our fish on the lower section. However, there were several runs on the upper section that looked fishy and would probably be productive at the right time of the day or when fish were looking up. Another note, you will lose bugs. Rocks, sticks, and other assorted hazards below the surface will take more than their fair share of rigs when the water is at this level. Again, this is pre-caddis and lower water levels. This should improve as the season moves forward. ~ Travis -- April 29th, 2013

We fished property A-6 south of Salida on Saturday, April 13. The water is fairly low for the Arkansas but running very clear. Starting with a red copper john attractor and size 20 olive midge patterns (Bob Dye's perriwinke and Charlie Craven's jujubee) we landed a number of 12-14 inch browns and the occasional rainbow. It was very windy, but just after noon there was a blue wing olive hatch and we started seeing some steady risers in the tail-outs of the larger pools. Fish were netted on both size 20 griffith's gnats and parachute blue wing olives. The hatch didn't last a long time, but the fish were very eager. Toward the end of the day we switched back to nymphs and midges, landing the largest brown of the day on a prince nymph. This is a very pleasant property that is highly recommended for a day of spring fishing. ~ JA -- April 17th, 2013

Fished the stretch above Swissvale. The morning was great. Caught several browns on Golden Stonefly and CDC glass bead and RS2 grey. Fish were along the edges near shore, some in very shallow water. Afternoon was pretty slow, there was a BWO hatch, but the wind took most of the bugs off the water. Fish were rising a little bit. Caught one on a dry fly and missed several others. After 2:30 p.m. It really shut down. Caught two rainbows and the rest were browns. Nice water, it would be fun to fish during the caddis hatch. ~ JK -- April 16th, 2013

With a CFS of about 280, the Arkansas River was low, wadeable and clear, maybe too clear. Total caught for this two day trip was about 40 trout, all browns but for a few RB, a couple of 16 inchers. Very large trout were observed feeding in the bottom of deep holes, but not willing to take what we offered: Top water red bellied never-sink-trude, #18 gold bead head midge pupa (thanks to the advice of Ark Anlers), Greg emerger and soft hackle pheasent tail. Nyphing in the afternoon in long trench like runs seemed to be the only place to get any bites after four p.m.. ~ Gene -- September 26th, 2012

On the morning of September 7,2012, fly fishing on the lower beat of the RMAC lease above Swissvale, 8 very strong, large and hard fighting browns came to hand, plus a 16” RB. Except for three, all were caught on a foam PMX, thanks to the advice of Greg Felt of Ark Anglers. Big bonus: It is a very good idea to ask Greg, or whoever is on duty at Ark Anglers, for suggestions about how to fish the lease when checking in with them on the morning of your trip. You have to check in so they can assign you to a beat. I caught browns on an orange foam PMX, a #16 black foam caddis trailer and a red zebra midge dropper, each at a different times, by the way. At least another 15 got away—water release. All told, Friday morning browns destroyed and stole two foam floater indicator flies. This lower beat is an easy stretch of water to walk and wade, at 325 cfs. It’s easy to access from the highway. Best of all, the foam line runs right along the shore on the highway side of the river, with deeper runs and riffles pockets dotting it all the way upstream. The rock strewn river bottom is fairly level in this lease, providing more slow moving holding water. Count on at least one trout to rise in every low spot. It is almost perfect level right now, in early September. There were several times when I caught multiple trout out of the same low spot. I look forward to returning. ~ Gene -- September 8th, 2012

Fished beat that starts at Swissvale sign and goes upstream for about a mile. Day started at 9am with 12 fish landed by 11am - BH pheasant tail, BH soft hackle hare's ear, and WD-40 all produced equally as well. Fish were spread throughout the middle of the river with no action happening near the shore. Fish was slow and steady as I worked my way upstream to the "big" hole by 4pm. Big hole did not produce as well as I would have thought yielding only a couple fish. Hiked back to the car to get some more water and then started fishing from the bottom again at 5pm. Amy's ant trailing an elk hair caddis yielded nothing for about 20 casts...until I started skating them across the surface and the explosions started!!! Stood in one place and landed 6 in short order on both Amy's Ant and elk hear caddis. After an hour or so interest died down and switched back to nymphs to finish out day until dark. 25+ landed with 7 being bows - largest fish was an 18"bow. Most fish 12 - 16". Fish on the Ark are rockets - running back and forth across the river as soon as hooked before finally yielding to the net. FUN place to fish - I will be back!!! ~ Brian -- September 4th, 2012