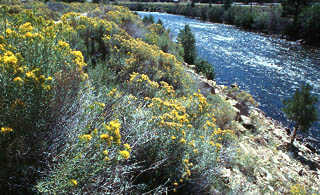 Description: Over one mile of year-round river consisting of long runs, riffles, and pocket water. Browns and rainbows in excess of 18 inches have been reported. Lightly rafted with an occasional kayak.

Location: The property is located 20 miles south of Leadville and 12.5 miles north of Buena Vista on the east side of Hwy. 24

Beautiful fall day on the Ark, 65 degrees, cloudless skies, low clear water. Uh oh, not the recipe for a 40 fish day. That being said, the fish could be coaxed up. Nothing on the top and most of the fish in the riffles. Good mix of rainbows and browns taking hares ears, #20 red zebra midge, and RS2's. Couldn't get a hit on a streamer. Fish were scattered throughout the property. About a 10 fish day and well worth it for the views and weather. ~ Ken -- October 16th, 2017

We hit the water around 9am and put a 17in rainbow in the net on a white sparkle minnow. Started in the middle section above the foot bridge then worked up to the train bridge. 4-5 small browns and rainbows on small hoppers. Tons of stoneflies all over the rocks but no love on the Pat's Rubber Leg today. Great day on the water, had some mountain goats and osprey in the mix as well. ~ Andy Norwood -- August 19th, 2017

The fish Gods were smiling on A-3 today. Arrived at the river to find the flows at 1,100 cfs the top end of the range to fish this property. Only about half the available water was fishable but that part fished very well. Golden stone flies hatched throughout the day although the fish did not seem keyed to take them off the top. Caught lots of fish in the morning on a nymph rig with a size 14 Prince and a size 16 Hare's Ear. After lunch, finally got tired of getting hit in the face by air borne stone flies and switched to a #10 rubber leg yellow stimulator. Spent the rest of the afternoon catching fish on the surface. All in all a great day! ~ kencohen -- July 1st, 2017

5-13-17, Solid day on A-3, we showed up around 8:45 am and the river was way off color and moving pretty quick (close to, if not above, 600 cfs). I was pretty worried because of the water color, but we headed to the lower boundary and started throwing streamers (double thin-mints) we got a few nice ones right away. We continued upstream throwing streamers and chartreuse caddis pupa and kept bringing them in. After lunch we headed to the upstream boundary, big hole at the railroad bridge. We threw the same rigs and got another 8 or so. They repeatedly hit any color pats and beadheads. All in all we caught 20 or so fish ranging from 6" to 17', mostly browns with an occasional bow. There was a lot of bug activity but the water was moving to quick for any dry fly action. Great stretch, must be a blast when the water is better clarity. ~ Brad Rettig -- May 15th, 2017

Was glad I opted to wet wade even though it's already cooler up there...just not that much water that you are even getting into. I was surprised nymphing wasn't more successful, but if I had to do it over again, I'd probably fish deeper in the couple runs. One challenge is the constantly changing depths....so an adjustable indicator would be better than hopper dropper. Saw a couple caddis still coming off, and a decent amount of small mayflies and midges in the afternoon. I did have some good luck with a very small BWO on 6X in a couple of the very slow seams. Beautiful up there now! ~ Tommy Lorden -- September 17th, 2016

Very windy day on A3. Water was off color and surprisingly warm. 3 fish on varied flies. No hatches. ~ Mike Narkewicz -- May 8th, 2016

Partly cloudy day with late wind. Water temp in 50's. Only 5 trout to hand--10"-14". Found out late in the day I had been following in the wake of another member who I did not know was fishing the same property. He arrived about 1 1/2 hours before me. May have made a difference in the number of strikes I was getting. Most caught on red Amy's Ant, #12. One on RS2, black. Saw them chasing black Copper John. Rainbow and browns. Water about 270 cfs. Red seemed to be the color of the day. No action on tan hoppers and very little on droppers. ~ Gene -- August 27th, 2015

Have fished this property about a half dozen times and know it farily well. Water levels are still higher than usual which creates faster flows and deeper water making it tricky to get down into the best nymphing holes. - good water for the Czech technique! There was an early caddis hatch but the wind came up early and the fish stopped rising - with only rare takes on dries. Caught about a dozen fish, half rainbows/half browns all in the 10-15" range. Most were on double nymph rigs using hares ears, green copper johns and RS-2's. Best water to fish at these flows was the long nymph run below the bridge and the east side of the river at the first big bend. Lots of great pocket water at either end of the property but didn't fish well this day. Beautiful stretch of river with canyon walls as a backdrop. Watch the boards crossing the suspension bridge, there are some loose ones and one hole to avoid! ~ ken cohen -- August 9th, 2015

The Ark near A-6 was high and muddy so I went to the upper river at noon. It was high at almost 600 cfs but clear to a depth of about 18 inches. I caught eight trout 10 to 16 inches long, 2 rainbows and the rest browns. They took green caddis larvae and golden stone nymphs dead-drifted in 2 to 4 feet of water. A few adult caddis were around but no fish were rising. No hits on streamers. ~ John -- April 22nd, 2014