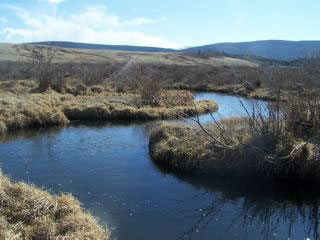 Description: Located 2.5 miles southwest of Fairplay, CO, this section of Fourmile Creek contains two stream miles of a creek dotted with beaver ponds. It offers fast action for a large population of wild browns and an occasional rainbow.

Capacity: Limited to 3 anglers, or four if all in one group.

Many small fish < 10", none caught larger. Used hoppers after trying a variety of common CO dries and nymphs. Many hoppers were in grass near the stream Day was sunny and clear, which may have made fishing difficult. Beaver ponds appear to have been blown out during prior run-off. Even with only tiny fish, it was a fun day. ~ Rick Ferrell -- August 5th, 2017

Nice morning and tough afternoon with rain, sleet and wind at 2pm. fished from 8:30 to 2. 5-6 really nice fat bows 16-17" - many smaller browns to 12". flows low even after rain. All beaver dams blown out I guess from runoff. This is a very enjoyable stream with great views and a variety of water Larger fish on tan hopper on top and green copper john underneath. equal on both. Almost all colors of CJ brought browns-- Editors note: Other members talk of new beaver dams on the lower end of the property. Thanks for the nice report. :) ~ Bill J -- August 26th, 2016

Great day on Fourmile. My 13-yr old daughter and I landed some very nice fish in the beaver ponds, all on dries - fish were (surprisingly!) in the 14-20" range. Moved on to the creek and had continued success with dries - fish in the 9-12" range. Beautiful property. Water was a bit high, but very fishable. Fish holding in soft water and mostly deep in the undercut banks. ~ Keith Tucket -- June 30th, 2016

Hazy, warm and breezy conditions on Four Mile. Property changed a lot since last year as a lot of the upper beaver ponds were blown out over the spring, but there are still numerous deep pools and great holding water. Flows were moderate and the water was gin clear. We started on the lower end and soon found that black & brown hoppers were the dry fly of the day, no surprise as they were everywhere in the tall grass. Started out catching numerous browns in the 8-12 inch range, and after lunch we hit the upper half of the property and started hooking up with some bigger rainbows. Between us we landed 5 over 18 inches with the prize of the day a fat 21 inch bow, and we also broke off at least that many. Toward the end of the day we found a deep hole with at least 10 large fish stacked up and feeding. Had luck there with wooly buggers although the takes were very subtle. We caught fish in shallow riffles, undercut bank, deep pools and the fish were eager all day. At one point a large bow hit a fly so hard it actually jumped out of the stream and on to the bank before rolling back into the creek and breaking off. Awesome day on Four Mile! ~ VRIG -- August 22nd, 2015

Fun Day. A guest and I on the water around 9:00am, light sporadic hatch all day. We walked to the bottom of property and worked our way up. There are no beaver dams or beavers any longer in the area, focused on plunge pools and undercut banks. Lots and lots of little browns, each easily over 15 apiece of the little gents on the day. My guest found a nice pool and first connected into one of Jimmy’s stockers (Rainbows), then what I would call the fish of the day – nice 16”-17” Cutthroat with nice colors. We proceeded to focus on the Rainbows the rest of the day. Using Hopper dropper setups on the way up and around 4pm using Streamers on the way down with a 70/30 split between hopper & droppers. The final fish was in that same pool where we took another nice Rainbow. ~ George Schmidt -- July 19th, 2015

Hiked and fished A-2 yesterday. The stream was only flowing about 30 cfs or so but, as narrow as it is, that is still a raging torrent and too high and rough for dry flies. Adding enough weight to deal with the fast current basically guaranteed snags. "Rig up, snag up, break off, repeat" was the mantra of the day. Still, I got a nice brown (about 10 to 11") in one bend and two small browns in others. After lunch I hit some slack water and did somewhat better, hooking one fairly large brown that got off and three little guys. Best time was when I had a double on dries (a para Adams and a BWO). Little 6 inch guys but just a blast. As I left the slack water, I encountered a big, fat guy in the 14 to 16" range but, with storms closing in, I didn't stick around to try for him. BTW, you might want to add "quick sand" to the list of hazards one can encounter there. ( Jimmy adds: Be aware that after runoff the silt in areas may be soft and gooey, quick sand is a stretch, we have not lost any anglers there so far. There are plenty of cut beaver logs to pull yourself out with :) ~ Larry G. -- July 14th, 2015

Four fly fishers including one beginner caught 39 brown and rainbow trout from 4" to 18" in about 5.5 hours. In the morning about 11 were caught on Royal Wulff and BYO emergers, both in the still water behind the beaver dams and in the riffles between each pond. The 18" Rainbow took a #12 Royal Wulff. Before the huge Rainbow, he had walked up a rattlesnake in the tall grasses. Over lunch we all marveled at the size of the Rainbow and that rattlers were at that altitude. We were moving slowly through the grasses the rest of the day when we approached a pond. Sat out the lightning storm, had lunch and started again The creek came alive with Caddis and either Yellow Sallies or Golden Stones. The Caddis were micro up to moth sized (hook size #16). So in the afternoon we used the Yellow Foam/Elk Hair wing Puterbaugh Caddis size #16 and our catch rate finished the climb to 39 before 5 p.m. The other surprise of the day was the size of some of the trout, both RB and Brown: 14" and 18" Rainbow and 16" Brown on but got away. The larger fish were well educated and difficult to maneuver in such the shallow and narrow stretches of water. ~ Gene -- July 27th, 2014

Didn't arrive at the property until around 10:30. Parked the truck & looked down at the beaver pond below & fish were rising calling us to hurry up. Once gowned up & on the water had a lot of fun. My wife started in the beaver pond with a royal wulff & had one of the big boys on but lost it. I started downstream with a size 16 royal stimi & immediately caught a nice 15" bow (after missing 2 fish!). After lunch I tried the beaver pond with a size 14 orange stimi. I was skipping it back towards me when I hooked into one of the big 'bows that inhabit the deep pools in the pond. I was using my 3 wt. & had fun with a good fight but eventually lost the fish. Bottom line- 12 -15 browns (10" range) & the one 'bow. All landed on either royal stimi or royal wulff. Called it quits around 2:00 when the thunderstorms started building. Lots of fun-will return. Wild flowers beautiful! ~ Stu -- July 13th, 2014

What still running high, but clear. Outside of the beaver ponds this property is tight. Spotted lots of fish, couldn't entice them with a variety of wet and dry offerings. ( Club Pres. Jimmy Stogner says roll cast and slowly strip small BH black or olive wooly buggers in the deep pools when all else fails on those big, stubborn rainbows. ) ~ Jason -- June 29th, 2014

Pretty little property that reminded me of the one time I fished in rural England. Trees form a canopy over the creek that requires a reasonable amount of side casts. I visited the creek during run-off. Flows were relatively high but given the small size of the stream it was still reasonable to wade. I fished from 10:30am until 2pm and caught about 6 fish in the 10-13 inch range. I had to fish in just a handful of sections of slow water that I could find and in each I was able to land a fish or two. I used green copper john and prince nymphs. ~ Ed -- July 4th, 2013