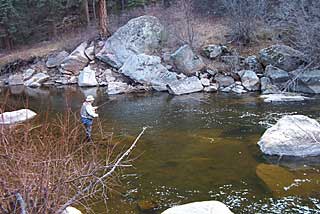 Description: The Bein Mountain Ranch contains about ½ mile of the 30-40 foot wide Big Thompson River. Good numbers of wild rainbows, as well as cutbows and browns thrive in this river, most in the 10-12 inch range and some exceeding 18 inches.

Location: This property is located between Estes Park and Drake, approximately 1 1/2 hours northwest of Denver.

Capacity: Limited to 2 anglers, or 3 if in one group.

Best day of rainbow fishing this year. All but one caught on a brassie (no bead head), with the other on an emerger. Saw only one brown chase the emerger, but who cares when two of your rainbows are over 21”. Top half of the property always fishes well, from the end of the second center island up to the hole at the end of the property. I am getting to know one of the 21’s rather well, as one of its pectoral fins is clipped. Last time it took a pink streamer, this time it was the brassie. Apparently it is well trained and paid to strike your offerings. It seems to share the hole with a large brown that is more selective. Plenty of smaller, wild rainbows that are fun on a 3wt or lower. Definitely recommend the 5-6wt when chasing the larger fish in the deep pools. 5x flouro was plenty light. Used a bit of drop shot rig from nymph to emerger up the line, high sticking the deeper runs. It’s dark and cool in the canyon, generally shade all day. How the fish see something so small in deep dark water up against a bank is beyond me. ~ Marco -- November 13th, 2017

Although it has been a dry fall, there is plenty of water on this property holding a number of fish. Today, several rainbows on 18 midge nymphs. I fished with a float, lead and two 18 midge nymphs in all of the usual places above and below the bridge. Fish came from all depths over one foot. On the last drift of the day, I collected a brown and a rainbow on the same line, one on each nymph. The deep quiet pools are holding fish over 20", as I had one well into the 20's chase my streamer more than once in the upstream pool. Initially I hooked a sucker in the pool and the large brown followed it around while it was on my line. I put a streamer on and it went for it a couple times, just coming up a bit short. One of my best days on the water this year. This is a classic example of why you don't listen to guides. I hired a guide earlier this year, and on the way back from a trip on the Colorado, I asked him how the Big Thompson was fishing. He said it was still blown out and had not recovered from the flood. He said I should hire him to go fish the Poudre. It's disappointing to hear this from a professional, who more likely than not, knew the Big Thompson held plenty of fish, and I wouldn't need his "expertise" to fish it. I hope he is the minority. This stream has plenty of fish, and the property in particular is still fishing exceptionally well, better than the last time I fished it prior to the flood. ~ Marcopolo -- October 30th, 2016

Cloudy and light rain.. River was high from recent rains and very difficult to wade. Lower end too rapid to fish. Couple of soft pockets yielded 2 fish, one on nymph, one on streamer. Flows need to come way down to make this worthwhile. ~ Mike Narkewicz -- July 3rd, 2016

Nice day, water flowing about 125 cfs. up from 10 days ago, but still clear. I caught a dozen fish 6 to 14 inches on prince and copper john nymphs in the morning, then several including a 16-incher at the lower end in the afternoon. No fish were rising, but I persuaded a couple to strike on a big stimulator dry. Most were rainbows, just two browns. ~ John -- May 31st, 2016

A beautiful piece of water and it's loaded with fish... but they were out to lunch. Of course, shame on me for showing up at 9:30 instead of 6:00 AM. Fished the whole property, managed to catch a couple plopping black deer hair beetles into the slow spots on the far bank. Hooked but lost a really big trout at the upper pool on an olive Trash Can Streamer. There were no hatches and no risers. Just an off day. Was vastly entertained by hummingbirds chasing midges! Next time I'm coming in the PM and fishing till dark. ~ Robert Hesse -- August 4th, 2015

Two of us fished on both Saturday and Saturday. The fishing was good, as usual. The river was at about 140cfs, I believe. The hatches on Saturday were more dense. There were two heavy storms that rolled through late Saturday afternoon, and the water became slightly discolored. There were a few pmds, a ton of red quills, plenty of caddis, and some small stoneflies. We caught a ton of fish on Saturday all throughout the day. Various caddis imitations worked, as did some red quill emergers below the surface. Sunday was slower than Saturday for sure. The storms came through earlier and chased us off the river by noon. We caught about an equal number of browns and rainbows. ~ Mike Murphy -- July 16th, 2013

The flow was nice at about 140cfs, and the weather was ideal with temps in the upper 50s to lower 60s and cloudless. There was very little wind to contend with for the day. The fishing was TOUGH. Two of us ended-up catching under 20 fish total. Knowing this property as I do, that is a tough day here. There was a light baetis hatch at times, and no other bugs were seen. Numerous baetis emergers were tried with limited success. There were only two fish seen feeding in top. Fish were caught on golden stones; psycho prince, BH pheasant tail, pat's rubber legs, and a couple of other patterns. We switched flies A LOT, which is also something that you never need to do at this river when it is "on". Oh well, some days are tougher than others, right? ~ Mike Murphy -- June 3rd, 2013

Decided to fish this instead of competing with the Memorial Day crowd on the Big T - Great day to be on the water. Started below the bridge and promptly caught 10 in a row on a dry dropper rig (Adams/BHPT). Moved upstream and caught a few more before changing to a new full rig nymph setup that I have been trying. Caught a few and missed several before going back to the dry dropper. Nice property to fish by yourself or with a buddy. ~ A Slaughter -- May 27th, 2013

It was a great dry fly fishing day under partly cloudy skies and 50 degrees temps with minimal wind. Arrived at Noon and fished until 5 pm. Landed 12 trout, mostly browns from 10-12 inches on BWO Extended body #20 and Parachute Adams #20. Lots of other strikes but I was not skilled enough to hook them. BWO's were hatching in small waves for a few hours in different places. The folks at Kirks Flyshop in Estes helped with the fly selection. I tried some nymph fishing with some success but gave that up because who can resist surface fishing. Flows were good and water was clear. I tried the big pool near the downstream boundary for the first time. Saw a few large rainbows chasing each other around in the pool. They seemed to have other things on their mind aside from feeding. The pool had quite a few risers but I was unable to get a take. Overall, great experience. ~ Mark -- May 10th, 2013

55 degrees, overcast, fished from 1-6pm. Water flow perfect and clear. This one was too easy. BWO hatch from the moment I arrived. BWOs worked best for first few hours, then para Adams worked better as the grey seemed to be a perfect match in the light. 24 caught and released, another 5 or 6 lost, and a good 10 more missed plus a bunch refused. All but one on the surface (that said, I quickly ditched the dropper when I realized the bite was one). Steady feeding the whole time I was there. ~ Steve Fitzgerald -- May 6th, 2013