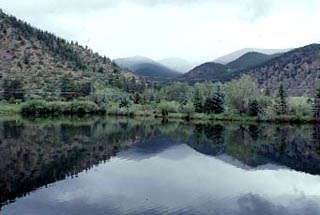 Description: This beautiful 5-acre lake is perfect for belly boating for rainbows, browns, and brook trout. It has been reported that some of the browns are very large. The lake ranges from 15 feet deep to nice, shallow flats for feeding trout.

Location: The property is located approximately 40 minutes west of Denver, just south of the town of Empire.

My maiden voyage on my new float tube. Arrived about 8am, nice, sunny w/clouds. Had to work hard for the 15 fish caught this day. Started at the outlet end of horseshoe, slow one fish on Streamer. Backed up to walk bridge and casted double dry (Amy's and Cadis) to other side, caught another 7 fish over 3 hours. Ore'd over to other side to hit the long deep run, caught two on streamers and another 5 on double dry's again (stimy and cadis). Went back to the outlet for the end of day and caught two more on double dry's. Lots of looks all day, few bites. Browns, Rainbows and two very nice Cuts. ~ George Schmidt -- June 4th, 2017

I took 2 guests to Empire on a beautiful fall day. We tried a variety of flies and had looks but no takes until just before noon. Then we hit on the combination of a caddis dry with a tiny (#22) dark colored dropper. It seemed like the cruising trout were initially interested in the dropper and would eat it. But sometimes, at the last minute, they would opt for the larger dry fly. We each had half a dozen or so nice size rainbows landed in addition to a few that shook free. Wind and weather cut the day short but the quality fishing, along with the beautiful setting, fall colors and easy company, made for a memorable day. ~ Larry G. -- September 24th, 2016

Another good day at Empire. My guest caught a large, picture-worthy bow on the first cast. It was slower the rest of the day but we ended with double digits. My guest scored with a large hare's ear he found on the ground, worms, leeches and eggs. I did well with an olive Amy's Ant trailing dark-colored midge and BWO droppers. ~ Larry G. -- June 18th, 2016

Perfect weather, great company, poor fishing. The day was bright and clear and the wind was very slight. A few fish were sipping, many more were undoubtedly cruising below, but they just wouldn't eat our flies. Leeches, wooley buggers, dries, nymphs, nada. One or two all morning despite many fly changes. Around 11:30, a traditionally slow period, they started hitting everything and we all hooked up 5 or 6 in the next hour. Then it slowed to a crawl again. Strange day - but a great day nonetheless. ~ Larry G -- June 8th, 2016

Another great day on this beautiful lake. Midges all morning, dries all afternoon. I started at the outlet and picked off several using an unweighted #20 black chironomid (similar to a zebra). Moving from spot to spot I tried many different flies but kept returning to the black midge; it was the hot ticket all morning. Things slowed down in the afternoon so I switched to dries and had one-and-done success with a hopper, stimulator and parachute Adams. But once I tried a PMX I found the answer. The last bow landed was one I'll never forget. He literally jumped over another bow to take my fly. A perfect ending to a perfect day. ~ Larry G. -- June 4th, 2016

An annual tradition, Empire Lake during runoff. This year the outlet area proved most prolific, with several dozen taking a 18-24" dropper (red or copper bh john) tight along the willows. Most 15-18, one 23'. Almost all jumpers, strong and feisty. Took another 10-12 elsewhere on the property, mostly by casting to cruisers. All but two or three on a nymph. Unlike in the past, the inlet area was not all that strong this time. Fishing was best after it warmed up, about 1-5 (which seemed strange, frankly). And the double cheeseburger at the Dairy King was terrific as always. ~ Steve Fitzgerald -- May 30th, 2016

We arrived about 7:30am, Canoe in water by 8am. Started by the inlet and caught a very nice colored and fat Brown (18”) and a couple smaller ones on streamers. Only a few rises in areas so streamered down to outlet and noticed a lot of rises and jumpers so changed kits to dry droppers and just nailed them all day. Did try the other side of lake for a bit, caught a few (5-6 fish) but moved back to outlet… It seemed everything pretty much worked including Amy’s Ant, Hoppers & large Yellow Stimulators, dropping Bread Crusts, Hairs Hears, Prince Nymphs (@18”)as the middle fly and Red and Blue midges (@6”-8”) on the bottom. Most fish caught on Bread Crusts and Hairsears and blue & red midges. Together we put well over 40 fish to net and were woopin’ it up by the end of day (5:00pm.) ~ George Schmidt -- May 25th, 2016

Beautiful day. Fished mostly in the inlet and didn't have to move much. Landed 28 fish. Best flies were a copper john or a stone fly under an indicator. Snapped off a copper john and got my fly back when I caught that fish again. All very good sized rainbows no browns. Amazing day of fishing ~ Jim Meyer -- May 10th, 2016

My fishing buddy and I arrived about 9:15. It was too windy for float tubes so we decided to fish from shore. It was tough going at first as the fish wouldn't take any type of leech or egg. Once the angle of the sun allowed us to see below the surface, however, we noticed the fish were suspended just 2 or 3 feet down so we switched to emergers and started catching them pretty steadily. They seemed to prefer small (#20 and #22) brown or green bugs over anything else. The wind got wild at times, nearly knocking us off our feet and sending our lines into the willows. But as the fish were biting we never thought about leaving. We did move frequently to (try to) keep the wind at our backs and relied on roll casts more than usual. One of the very friendly owners stopped to say hello. He told us how they'd seen 10 pounders caught here. I'm sure the info is accurate as he obviously cares about fishing as much as we do. We finally called it quits about 3:00 with a dozen or so each, several over 20". A very worthwhile day in a beautiful setting. ~ Larry G -- April 25th, 2016

Fellow member and Fishing buddy, George and I planned a day on the Fraser. Unfortunately with two days of rain, it was not fishable (at least to our expectations). Fortunately Jimmy was on the spot and we got a day on Empire Lake. First lesson, Empire Lake really needs to be fished from a personal floatcraft. George and I made the best of it. Lots of risers ...to of all things, a small Size 16/18 green stonefly...on top of it the fish were only taking emergers. (who carries size 16/18 green stonefly emergers?) We threw almost every caddis/mayfly emerger patterns we had in our boxes the right size and color. Between George and I, we caught less that 10 fish - a couple in the 18 inch range on very small hoppers. Had we our float tubes, pontoon boats, or canoe we could have done much better I think. There are some giants cruising around that Lake! ~ Joe Bo -- July 15th, 2014