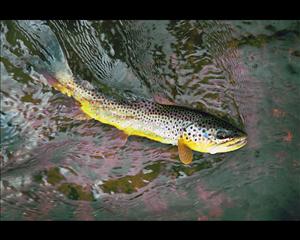 Description: A small stream full of wild brown trout. Middle Michigan Creek is a high country meadow stream, replete with oxbow bends and open casting. It is an excellent choice for novice flyfishers and children, but experienced anglers will find enough casting challenges and larger fish to please them as well. There is also a lovely home located in South Park that the landowner is willing to lease for two nights or more.

Location: From Denver drive south on Hwy. 285 to Jefferson. The property turn off is 2 miles past Jefferson. The distance from Fairplay is measured from the Como turn off which is 4.8 miles to the ranch entrance on the left.

Capacity: 3 anglers or more if all in one group.

Caught 24 browns on #18 black bead-head Princes and red Copper Johns dropped behind dry flies of various sorts after lunch. Around lunch time a woman driving a Jeep jumped ahead of us, fished a while, then left. We thought she might be the property owner. The Highland cattle were at the upper end. There were no lightning storms and only a few minutes of rain. Tea colored water but could see 2-3 feet into the stream. Not sure why but there were no strikes by any trout in the lower section. The wind was 20 knots at least after lunch. But the advantage was it made so much noise it covered our footfalls, I think. So we were able to fish right off the bank and into pools right below us, catching multiple trout from each pool before moving on. ~ Gene -- August 5th, 2017

Really fun day, despite a couple of dead periods. Arrived about 12:30 with the plan to fish until dusk to miss the Sunday afternoon traffic and see how the stream fishes late. Both anglers experienced pretty slow action between about 1230 and 3, and again from 5-6. Like others have mentioned, the most productive fishing was on the upstream half. Royal Wulff & tan foam hoppers seemed to attract the most takes, though Parachute Adams, Stimulators, small red Copper Johns and Prince also caught fish. Even had action late in the day with a small olive Woolly Bugger. Everything was pretty small -- all Browns, biggest maybe 14. We did share the stream with the cows who really didn't understand what we were doing. Breezed home with almost no traffic. ~ JeffD -- July 24th, 2017

Started by 9:30. Sunny warm morning, caught about 6 small browns on a 16 elk hair caddis; missed about that many. Grasshoppers were starting to fly in the late morning promised to be a good afternoon until thunderstorms moved in around around noon. Didn't clear up after 90 minutes so headed home. Will be back. ~ Charlie S -- August 1st, 2016

This is the place if you want to satisfy your dry fly fishing addiction. Got there at 10am, and tried for 1 hour on the first 3 pools without success. Then I just decided to try my luck upstream. Wow! Caught 20+ fish by the time I got to the upper boundary, ranging between 4" -14", but mostly the 6"-10" range. This took 1 ½ hour, since it is a only ½ mile long or something like that. So I walked back down to the lower boundary and tried again. Again, not luck on the first 3 pools. So I fished upstream again, and caught 15+ fish by the time I got to the upper boundary 90 minutes later. I had lunch, a nap, and started fishing again at 3:30 pm. This time, I caught 10+ fish. Feels like they wised up. Less "looks" and more refusals. Then I walked downstream and fished. Caught 6+ more. Since the fish were small, I used a lightweight 14' Tenkara rod, which made it easy to control drift, but hard to cast accurately in 25+ mph winds. I used size 12 hoppers all day long. Anything bigger, and the fish would come up, look at it and refuse. Any smaller, and the fish didn't even come up. All the fish were browns. ~ Mike Wong -- July 15th, 2016

Long story short, got skunked. Short story long.... I fished the afternoon only. from 3:30-6:30pm. Water was clear and very low, weather was warm and clear. Chuck Prather's advice the day before was to avoid unlikely water and fish a parachute hopper (no dropper). He said he had fished the previous week and that worked fairly well for him. I fished upstream and had maybe 20 half hearted strikes, but only one fish on for a moment, and landed none after fishing the entire length of the property. All the fish seemed pretty small. I saw several fish in the 12-14" range, but they were holding in shallow water and spooked easily before I could get a cast to them. I fished the property a second time with a yellow Stimulator and didn't even get a strike on the lower half property. I fished the upper stretch with an Elk Hair caddis and only got a couple more strikes. It a beautiful day and a pretty spot, but the fishing was terrible. ( Jimmy's observation, twenty missed strikes and losing a fish in only three hours on the river does not equate to terrible fishing. ) ~ George Franklin -- September 27th, 2015

A great day. The South Park wind only made occasional appearances, and other than a 15 minute period hunkered down under a thunderstorm, it was a lovely sun filled day. The Highland cattle are just adorable too. Oh yeah, and I caught about 40 fish (honest), all be 3 of them browns. They were either right up against the banks, or would come flying off the banks to the center of the riffle to drill the fly on top. The further downsteam I went, the better the fishing was, I suspect as it got further from the cattle. Rig was simple: Beetle on top (black, about a 12 or 14), with BHPH two feet below. About 50/50 on those. When I eventually lost the beetle, a Turek's Tarantula worked just as well. Think legs. Nothing huge - biggest was 16" -- but plenty of spunk for my 4 wt. I would do a 3 wt next time, but I am sure there are a few lunkers in some of these holes, and might just regret it if I did. ~ Steve Fitzgerald -- August 20th, 2015

Two of us fished this property from about 9:30 AM until 2:30 PM. Nice and open, small creek but very few willows to get snagged on. Only issue was the highland cattle wallowing in the creek and muddying it up. Was much better once we chased them downstream. Started slow with takes on midges and small copper johns then picked up after lunch. Used yellow stimis on top and copper copper johns below. Later in afternoon it really got going, getting strikes on every other cast. Plenty of fish here but largest to net was 11 inches. Browns and a few brookies. Fun stretch if you get past the cattle. ~ mwooster -- October 9th, 2013

Started fishing about 9:30 with cloudy skies and temps in the mid 40s. The weather deteriorated through the day with high winds and temps dropping into the 30s. We caught 4 browns ranging in the 5-7 inch range and hooked one 20+ fish hiding under the bank. We tried dry dropper rigs with most of the hits on the dropper (BH prince nymph). ~ Chris Wilper -- May 19th, 2013