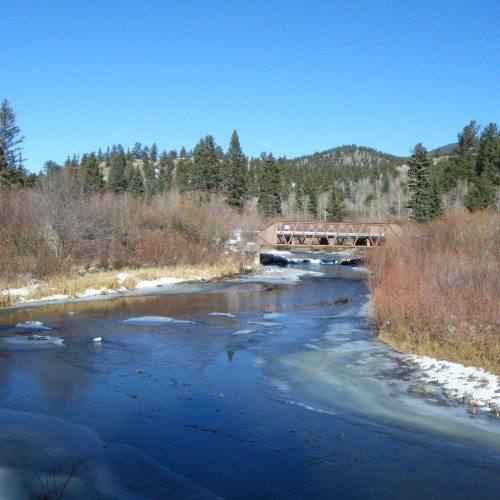 Description: 1/2 mile section of Tarryall creek downstream of Tarryall reservoir. Like A-8 and A-10 this property holds good numbers of average to large rainbows and browns. Typical meadow stream with some bankside foliage but generally open and easily fishable water. Moderate stream improvements produce some large pools and under cut banks. Available weekdays only

Location: Located twenty one miles south of hwy 285 at Jefferson along county road 77

Capacity: 2 anglers full or half day

The stream was running at 42.9 CFS (data taken from the station below Tarryall Reservoir). Fished from approximately Noon to 4:00 PM and the water was productive for the entire duration. Caught a dozen brown trout averaging 8 inches with the biggest fish at around 12 inches. Fished a 4 weight 9' rod which was perfect as the wind was fairly brisk throughout the day. The majority of fish were caught with a #14 Bead Head Prince Nymph (used as a dropper). A few of the larger trout took the primary fly which was a #10 Chernobyl ant. Several strikes occurred at the very end of extended drifts when the nymph began to swing around and rise in the current. ~ Matt H -- June 1st, 2017

Good Flows, clear conditions. Landed about a half dozen all on nymphs, prince worked best. No dry fly activity. caught browns and rainbows most fish were in the 10' range with one at 16" ~ Robert Johnston -- January 1st, 1970